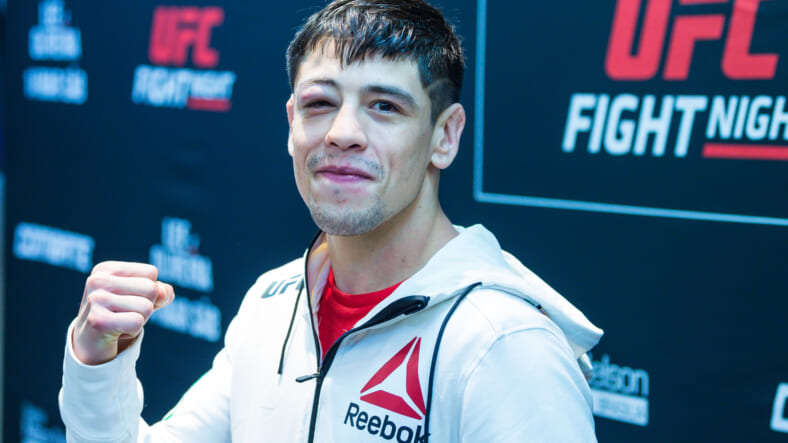 The trilogy is one for the UFC flyweight title. ESPN’s Brett Okamoto broke the news this evening that the promotion has finalized the third fight between the flyweight champion Brandon Moreno (19-5-2) and the former champion Deiveson Figueiredo (20-2-1).

The flyweight title fight will take place at UFC 269 on December 11th. Now, the UFC was actually leaning away from doing the trilogy with Moreno and Figueiredo. Originally, the promotion wanted Alexandre Pantoja to be the next challenger.

Pantoja and Moreno have history and Pantoja holds victories over Moreno. However, Pantoja wasn’t going to be ready until the beginning of next year and the UFC flyweight champion wanted to stay active.

With that in mind, the promotion went back to the former champion Figueiredo. Figueiredo has been asking the UFC for the third fight ever since he lost the title back in June to Moreno.

The two’s first fight was December 12th last year and the two fought to a draw. However, if it weren’t for a low blow which led to a point being taken, Figueiredo would’ve retained his UFC title that night and we likely wouldn’t have seen the rematch.

That being said, a point was taken from Figueiredo and the fight was declared a draw. When the two rematched back in June at UFC 263, it was all Brandon Moreno. Moreno dominated the entire fight and submitted Figueiredo in the third round.

It’s been quite the journey for the UFC’s flyweight champion. He was the last pick on The Ultimate Fighter and he lost early on in the show. After having an okay run during his first stint with the UFC, the promotion cut him.

Since coming back to the UFC, it’s been all up for Moreno. Moreno started with a draw with Askar Askarov, but has since gone 4-0-1 which includes his title victory over Figueiredo back in June.

These two will meet almost a year exactly to the date of their first fight. If Figueiredo wins, there’s a clear case for a fourth fight. However, if Moreno wins, he can cement his status as the best and put the Figueiredo saga behind him.