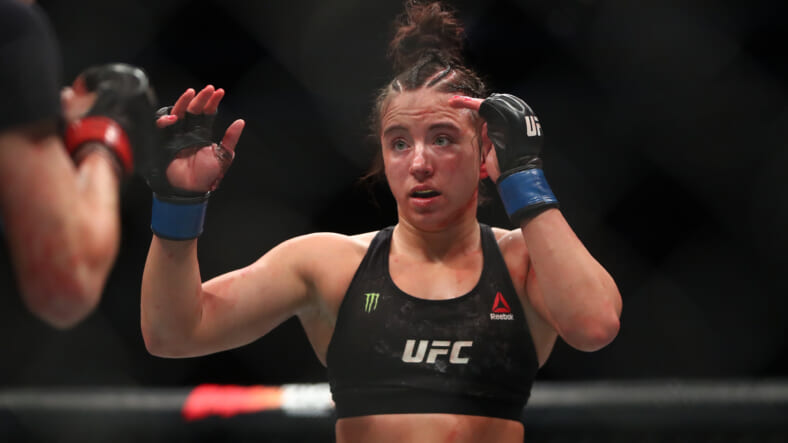 The UFC has finalized a fun flyweight matchup between two top prospects. Dana White confirmed with ESPN’s Brett Okamoto that the promotion was booking a flyweight contest between Maycee Barber (8-2) and Miranda Maverick (9-2).

The matchup will take place at a UFC Fight Night on July 24th. Both contenders rank just inside the top fifteen with Barber at 14th and Maverick at 15th. This is a massive opportunity for Miranda Maverick.

Maverick made her UFC debut in October when she took on Liana Jojua. She was able to earn a TKO by doctor stoppage after the first round. She last fought just over a week ago when she took on Gillian Robertson at UFC 260.

It was another impressive win for the 23 year old prospect. When Maverick makes the walk on July 24th, she will have just turned 24 years old and she has a big opportunity to defeat a big name in the flyweight division.

Maverick is riding a five-fight win streak counting her first two victories in the UFC. If she is able to win in July against Maycee Barber, her stock is going to start rising drastically.

UFC bounce back for Barber?

In October of 2019, Barber was in a similar position as Maverick. She had just defeated Gillian Robertson and she was 3-0 in the UFC. Her nickname of “The Future” personified exactly what the MMA community thought of her.

Barber was just 21 years old and many saw her as a future UFC champion. However, she ran into Roxanne Modafferi in January of 2020 and suffered her first loss. She also tore her ACL in that fight and had to miss over a year.

Barber returned at UFC 258 to take on Alexa Grasso. While Barber came on strong and had moments, she was ultimately outclassed on the feet and lost a decision. Barber was on a massive hype train and now she’s lost two fights in a row.