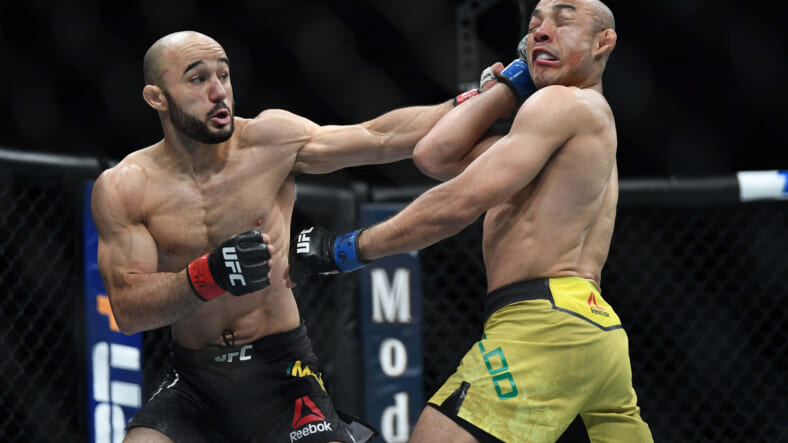 Magic Marlon Moraes (23-7-1) is looking to quickly right the wrong that happened at UFC Fight Island 5. After getting dominated by Cory Sandhagen, Moraes is hopping right back into the saddle taking on Rob Font (17-4) on December 19th.

The fight was first reported by MMA Junkie. Moraes has arguably lost three fights in a row dating back to his title shot at UFC 238. Moraes looked like a world beater before that fight and many believed that he would defeat Henry Cejudo.

Through one round of their fight, it appeared that Moraes would capture UFC gold. However, Cejudo started turning things around in the second round. Entering the third round, Moraes started to fade and Cejudo finished him before the fight got to the fourth round.

From there, Moraes fought and defeated Jose Aldo at UFC 245. However, most people who watch that fight believe that Aldo won the fight. Aldo was actually awarded a title shot despite the judges giving the fight to Moraes. Then of course Marlon was dominated by Sandhagen.

For Rob Font, it will be the first fight for him inside the UFC‘s octagon in 2020. Font is on a two fight winning streak with impressive wins over Sergio Pettis and Ricky Simon. However, Font hasn’t been the most active due to injuries.

This will only be Font’s third fight since December of 2018. If Font is able to win this contest, it would vault him into contention given his winning streak and caliber of victories. If you’re in Moraes’ camp, this fight is truly a do or die situation.

It is important for Moraes to try to get back in the win column quickly. However, if he loses again, you could make the argument that he’s lost four in a row. He wouldn’t be in danger of being cut, but it would be a steep climb back to the top.