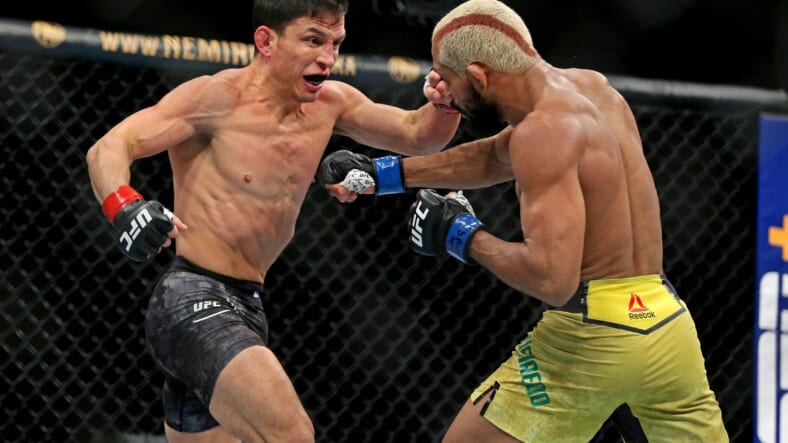 The UFC is finalizing a fantastic flyweight matchup for their March 6th card. MMA Junkie was first to report that the promotion is finalizing a matchup between former title challenger Joseph Benavidez (28-7), and Askar Askarov (12-0-1).

The fight is expected to take place on the main card of the UFC 259 PPV. Both men will enter the cage ranked inside the top 3 of the UFC‘s flyweight rankings. From a matchmaking perspective, it doesn’t get much better than this.

For Benavidez, he’s going to be looking to bounce back after back-to-back losses to the champion, Deiveson Figueiredo. The two first fought back in February where Benavidez was finished in the second round.

However, Figueiredo didn’t make weight so the UFC decided to run the fight back for the flyweight title. The second fight was even more dominating for Figueiredo who put Benavidez to sleep in the first round.

Despite being dominated twice by the champion, it should be known that Benavidez is still one of the very best in the world. He’s only lost to four men in his professional career: Figueiredo, Demetrious Johnson, Dominick Cruz, and Sergio Pettis.

The knock on Benavidez is that he’s always failed to win the big one. While consistently being one of the UFC‘s best, he’s 0-5 in title opportunities. With this fight on March 6th, he will look to climb the latter once again.

Standing in the way of Benavidez will be Askar Askarov. The Russian flyweight trains under Fighting Eagle in Dagestan which of course is the gym of UFC lightweight champion, Khabib Nurmagomedov.

Askarov is looked at as the potential next UFC champion to hail from Dagestan. So far, he’s made three appearances inside the octagon. He fought to a split draw against number one contender, Brandon Moreno. After that he defeated Tim Elliot and Alexandre Pantoja.

Askarov is the real deal and he’s very talented. This is not going to be an easy fight for either man. Either Benavidez will show everyone that he still has enough in the tank for one more UFC title run or Dagestan will flex it’s muscles once again.