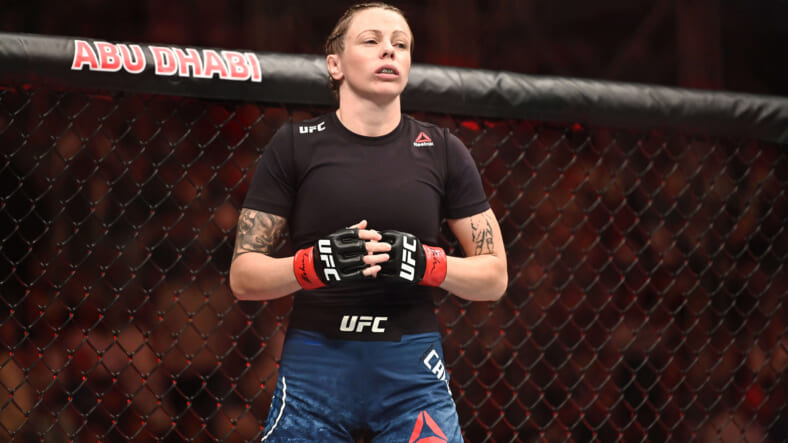 Just as the action was getting under way at UFC 260, we learned some breaking news. MMA Junkie was the first to report this evening that the promotion has finalized a matchup between top flyweight contenders Joanne “JoJo” Calderwood (15-5) and Lauren Murphy (14-4).

The matchup will take place at UFC 263 which is scheduled for June 12th. Calderwood will enter the contest as the sixth ranked flyweight in the UFC. She will be looking to take another step towards a shot at the flyweight title.

Last year, Calderwood was set to challenge for the flyweight title. The UFC booked her against Valentina Shevchenko in June. However, the champion suffered a knee injury and needed more time to prepare.

Instead of waiting on the sidelines, Calderwood decided to take a fight against Jennifer Maia. This ultimately proved to be a massive mistake as Maia would submit Calderwood in the first round and take her title shot.

Calderwood returned back at UFC 257 in January where she met Jessica Eye. She put on a very good performance and walked away with a decision win. This is going to be a massive fight for her on June 12th.

Lauren Murphy has been on quite the run in the UFC since 2019. Since the calendar turned over to 2019, Murphy has won four consecutive fights including wins over Andrea Lee and Roxanne Modafferi.

In her last fight, Murphy secured her first submission win at UFC 254. After the fight was over, Murphy said that she wanted a title shot. However, given her status in the division, that was always going to be a long shot.

Murphy is currently ranked third in the flyweight division. If she’s able to come out at UFC 263 and put on a dominant performance against JoJo Calderwood, it’s going to be hard to deny her of a shot at the title. Should be an excellent fight on June 12th.