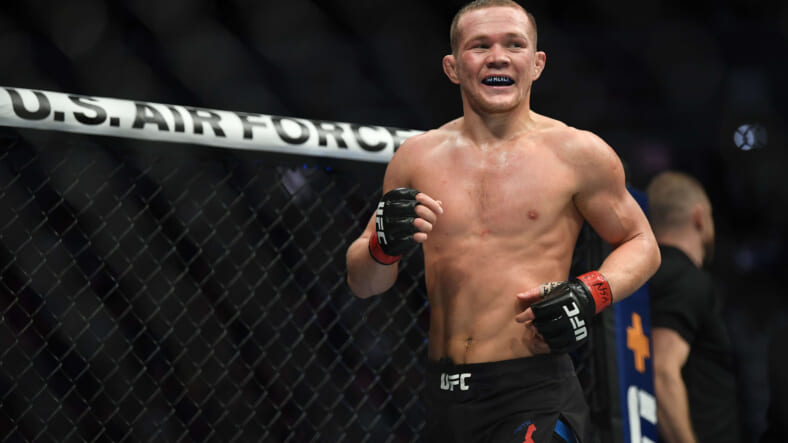 UFC 267 has a new co-main event. Over the weekend we learned that bantamweight champion Aljamain Sterling (20-3) was out of his title defense against Petr Yan (15-2) next month on Fight Island.

Sterling had next surgery earlier in the year and was trying to make his comeback to defend against Yan. Yan lost the title to Sterling back at UFC 259. The title change was controversial considering Sterling won by disqualification in a fight he was clearly losing.

Due to the nature of the fight, the UFC decided to run things back immediately. However, Sterling is going to need more time as doctors wouldn’t clear him to defend his title next month.

The promotion wanted to move forward with an interim title fight that featured Yan. The first choice was TJ Dillashaw (17-4). Dillashaw is ranked right behind Yan and just returned in July.

The former UFC champion defeated Cory Sandhagen (14-3) in his return, however, the fight was razor close. During the fight, Dillashaw suffered a knee injury which required surgery. With him still recovering, he wasn’t an option.

ESPN’s Brett Okamoto broke the news today that Sandhagen will now be getting a shot at Yan for the interim title at UFC 267. Sandhagen was the favorite for a title shot after he knocked out Frankie Edgar with a flying knee earlier in 2021.

However, after the UFC 259 result between Yan and Sterling, Sandhagen was forced to take a fight with Dillashaw.Â While two scorecards went for Dillashaw, many believe that Sandhagen won the fight. Now, due to two injuries, Sandhagen is getting his UFC title shot that many believe he deserved all along.

Before the Dillashaw loss, Sandhagen had gone 7-1 in the UFC with his lone loss coming against Aljamain Sterling. Sandhagen is looked at as someone who will definitely be a UFC champion at some point in his career.

He has all the tools and physical attributes to become a champion it’s just a matter of putting it all together. Now, he’s going to have his chance to do it. This is a fantastic fight and in my opinion, UFC 267 just got a lot more interesting.