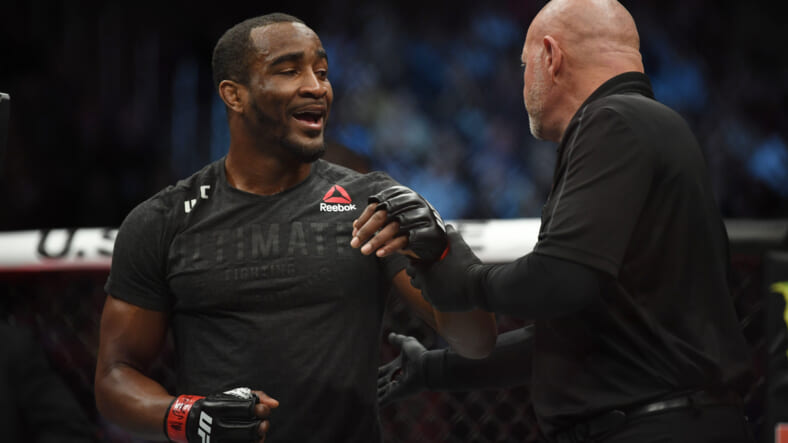 One of the biggest prospects in the UFC is about to face the toughest test of his career. ESPN’s Brett Okamoto reported yesterday that the promotion has booked the undefeated Shavkat Rakhmonov (16-0) against “Handz of Steel” Geoff Neal (15-4).

The matchup will take place at a Fight Night on January 14th. Now, you might say to yourself, “How could this be Rakhmonov’s toughest test when he just beat Magny who beat Neal?” and that’s a fair thing to say. However, the Geoff Neal who lost to Neil Magny isn’t the best Geoff Neal.

We saw the best Geoff Neal in his last bout. At a Fight Night in August, Neal took on the dangerous Vicente Luque. Luque was coming off a loss but had he won that bout, he would’ve been challenging for the title. Instead, he was facing Geoff Neal.

Neal completely pieced up Vicente Luque on his way to getting a third round TKO. When Geoff Neal is right, he’s one of the very best in the world. He’s going to be the first major road block standing in Shavkat’s way in the UFC.

Rakhmonov made his promotional debut back in 2020 when he took on Alex Oliveira. He submitted him in the first round. So far, Rakhmonov has fought four times in the UFC winning all four by stoppage. He looks like a superstar in the making.

Rakhmonov has incredible grappling, but he also has tremendous striking. Thus far, we really haven’t seen any weak points in his game. Thus, this fight really intrigues me. Geoff Neal has the grappling to be able to keep the fight standing.

If Geoff Neal is right, he has some of the best striking in the division. It’s going to be a massive test. If Rakhmonov can run through Neal like he’s ran through others, it might be time to put him in title contention.