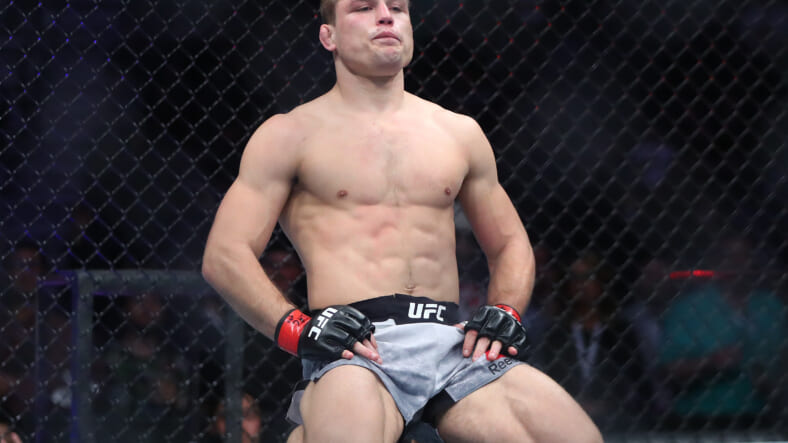 The UFC is in the process of finalizing a fun lightweight matchup for their June PPV. MMA Junkie was the first to report today that the promotion is in the final stages of booking Drew Dober (23-10, 1 NC) – Brad Riddell (9-1).

The matchup would take place at UFC 263 on June 12th. This would be a relatively quick turnaround for Dober who just fought back at UFC 259 in early March. That night, Dober took on the tough Islam Makhachev.

Makhachev is being looked at as a future UFC lightweight champion. However, Dober was 6-1 in his previous seven and many thought he’d give Islam problems. That is not what happened when they fought on March 6th.

Makhachev completely dominated Dober and handed him just his second loss since 2016. Now, Dober is looking to bounce back in taking on Riddell at UFC 263. This is a tremendous matchup between two fringe top fifteen lightweights.

Riddell seeks to stay perfect in the UFC

Brad Riddell is another intriguing prospect that has come out of City Kickboxing in New Zealand. Riddell trains alongside UFC champions Israel Adesanya and Alexander Volkanovski.

So far, Riddell has fought three times inside the octagon and he’s a perfect 3-0. He was set to take on Gregor Gillespie just a few weeks ago and if he were to win that fight, he likely would’ve been inside the UFC’s top 15.

However, due to a COVID breakout with the City Kickboxing group, the fight was called off. Now, Riddell is ready to get back to work and he’s getting a very tough test in Drew Dober.

If Riddell is able to defeat Dober, it will say a lot about where he is in the UFC lightweight picture. Whoever wins this matchup will likely get a ranked opponent in their next matchup so there is a lot on the line for both of these lightweight contenders.