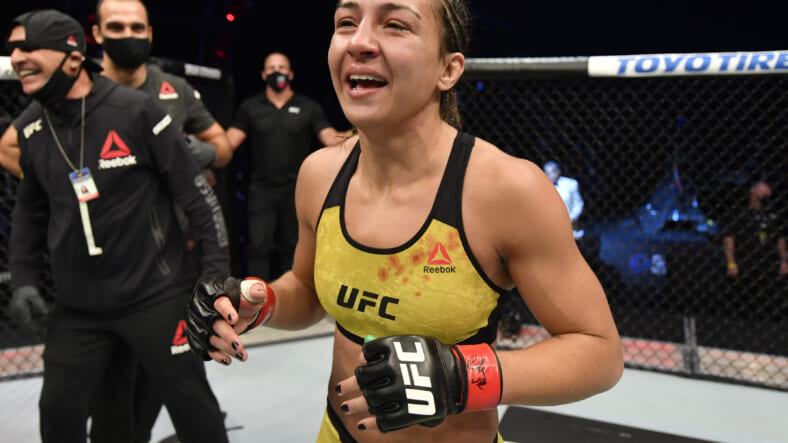 The fight will take place at UFC 267 on October 30th. For Jandiroba, she will be looking to pick up her second consecutive win inside the octagon. She last fought just a few weeks ago when she picked up a win over Kanako Murata.

Prior to that, Jandiroba had a fun fight with Mackenzie Dern back at UFC 256. While Dern picked up the win, Jandiroba proved to be a tough out and actually landed some good shots on the feet. Of course, Jandiroba is known for her skills on the mat as a BJJ world champion.

Jandiroba made her UFC debut back in 2019 against former strawweight champion Carla Esparza. She lost that fight, but overall, Jandiroba is 3-2 in the UFC. Her two losses have come against two of the best strawweights in the world. A win over Ribas in October would put her in a great position to move up the ladder.

Back on the UFC hype train?

Entering 2021, there might not have been a bigger hype train in the UFC’s women’s divisions than Amanda Ribas. Ribas had made her debut back in 2019 and she started 5-0 in the UFC.

Some of her notable wins included wins over Mackenzie Dern and Paige VanZant. The UFC was moving her up the ladder when they had her fight the dangerous Marina Rodriguez back in January at UFC 257.

Had Ribas won that fight, she would have likely been in a title eliminator following it. Ribas did a great job in the first round taking Rodriguez down and controlling the fight. Rodriguez is known for her power on the feet and Ribas did well to avoid it.

However, in the second round, she stood a little too long with Rodriguez and was taken out in the opening minute. It was a big blow that drastically slowed the UFC’s hype train. Ribas was supposed to fight Angela Hill over the summer, but a battle with COVID put her on the sidelines.

Now, Ribas is ready to get back in there. If she’s able to come out and put on a great performance against Jandiroba, she will be right back on track. I’m still a believer in Ribas and I’m looking forward to seeing her back in the octagon.