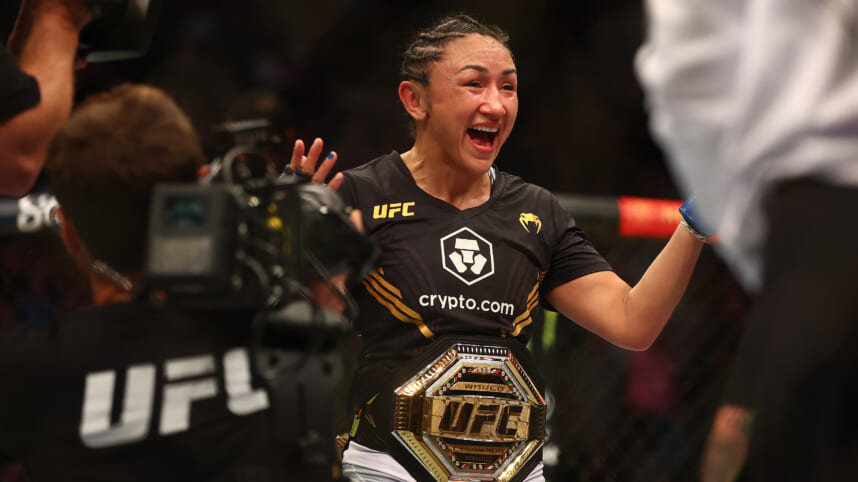 Tomorrow night in the co-main event of UFC 281, the strawweight title is on the line. Current champion Carla Esparza (19-6) looks for her first successful title defense as she takes on former undisputed champion Zhang Weili (22-3).

Esparza enters as the massive betting underdog despite being 2-0 against the only woman to defeat Zhang Weili inside the octagon. Both of those wins came against Rose Namajunas and they both resulted in winning the UFC strawweight title.

Most recently back in May. It was one of the worst fights I’ve ever seen but Esparza’s extremely limited output was still enough to win a split decision. The win was Esparza’s sixth straight win and marked the beginning of her second title reign.

Many still consider Zhang Weili to be the best strawweight in the world. She was stunned by a headkick against Rose Namajunas in their first fight which lost her the title, but lost a razor close split decision in her second fight.

Sandwiched in between those fights were two wins against Joanna Jedrzejczyk. Now, Weili will look to get back to the top of the mountain and reclaim the title she believes is her.

I’m going to be completely honest here, I’m having a hard time seeing any path to victory for Carla Esparza. Maybe I’m more down on her than others might be, but I just don’t see it. She has one path to victory and that’s pretty much it.

If she tries to stand with Zhang Weili, she’s going to get stopped. This isn’t Rose Namajunas who has a very patient and technical style. Weili is going to push forward and throw more power than just about anyone in the strawweight division.

Esparza’s only chance is to get Weili down on a consistent basis. If she can’t, she is not going to make it to the judges. I think in the first round, you’re going to see a lot of desperation from Esparza and perhaps she can land a takedown.

However, in the second round, I think she gets punished by Weili and the fight is going to be stopped. Zhang Weili begins her second title reign tomorrow night at UFC 281.

Prediction: Zhang Weili by TKO – Round 2