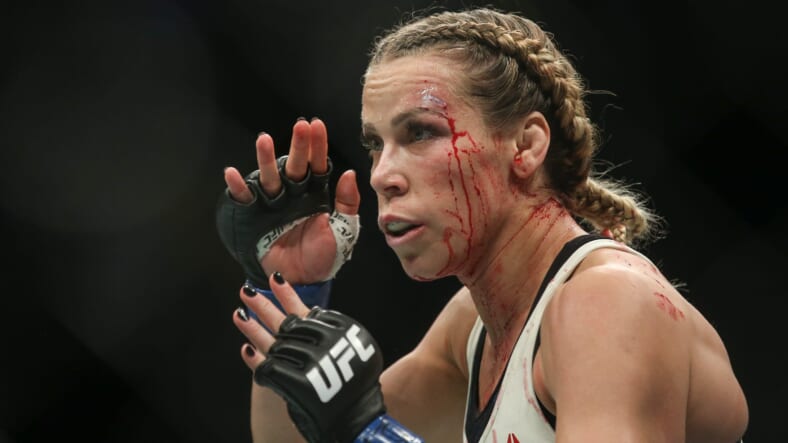 Kicking off the stacked main card of UFC 280 is a battle between two of the best flyweights in the world. Perennial top contender and former title challenger Katlyn Chookagian (18-4) takes on the surging Manon Fiorot (9-1).

Fiorot lost her first MMA bout by split decision. Since then, nobody has been able to defeat her. She made her UFC debut last year when she was 5-1. Since making her debut, she’s gone 4-0 and continues to look better and better every time we see her.

The last time we saw her was back in March when she defeated former title challenger Jennifer Maia. Speaking of Jennifer Maia, that is someone that Chookagian is very familiar with. Chookagian holds two wins over Maia.

Chookagian is becoming the gate keeper to the title at 125 pounds. It feels like she’s always ranked number one yet she’s getting bypassed for the latest title shots. However, she’s on a four-fight winning streak. If she can get the win at UFC 280, it’ll be hard to deny her.

Katlyn Chookagian throws a ton of volume and she does a decent job of mixing things up. In all of her wins, she typically outworks her opponents and wins with her volume striking and timely attacks. However, she’s going to struggle on Saturday night.

Manon Fiorot is the better fighter on the feet. When these two are striking on Saturday, I’m fully expecting Fiorot to get the better of the exchanges. I think Chookagian will hold her own, but I don’t see her landing the more impactful shots. Unlike some of her other fights, I don’t see her volume overcoming the lack of pop.

While a decision at UFC 280 is the safe bet, I keep seeing a body shot stopping this in the second round. During a close exchange, I see a brutal body kick from Fiorot sitting Chookagian down and Fiorot gets the stoppage. Cementing her case for a future shot at Valentina Shevchenko.

Prediction: Manon Fiorot by TKO – Round 2