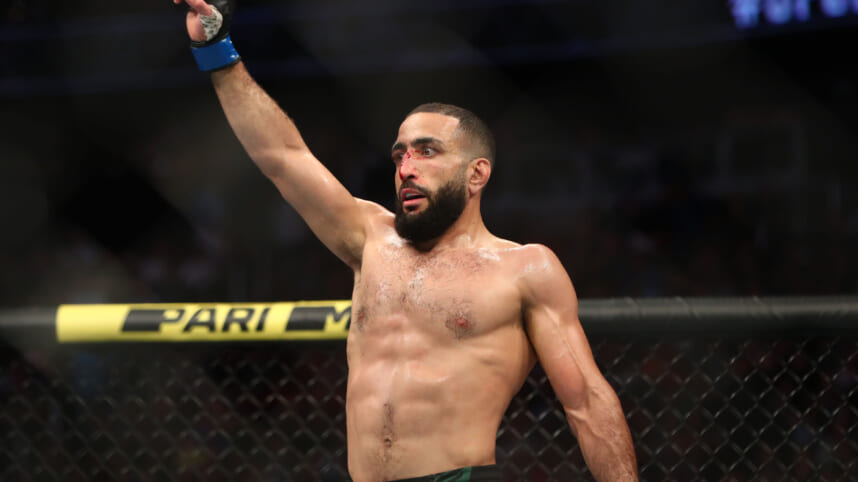 The featured prelim of UFC 280 is a big time matchup in the welterweight division. Undefeated top prospect Sean Brady (15-0) gets his biggest challenge to date as he takes on top contender Belal Muhammad (21-3, 1 NC).

Back in 2019, Muhammad lost a decision to Geoff Neal. Since that decision, Muhammad has fought eight times and he’s been close to perfect. Yes, he was getting dominated by Leon Edwards before an eye poke caused the fight to be declared a No Contest. However, he’s 7-0 in all the other fights.

His last two have been the most impressive as he’s picked up wins over Vicente Luque and Stephen “Wonderboy” Thompson. Now, he’s being tasked with taking away the 0 from Sean Brady.

Brady made his UFC debut back in 2019 against former Ultimate Fighter winner Court McGee. He won that fight and he hasn’t stopped winning. In his last fight, he took on Michael Chiesa who is known for his grappling. Well, Sean Brady mostly dominated the fight with his grappling. He’s going to be looking for the biggest win of his career Saturday night.

It’s crazy to think of any Belal Muhammad fight and say that he has the striking advantage. However, here we are. I do think that Muhammad is the superior striker between these two and if he can keep the fight standing, I think he’s going to have a lot of success.

However, keeping the fight is going to be a challenge. Sean Brady is a sensational grappler who makes good grapplers look not good at all. In the grappling exchanges, I fully expect Brady to get the better of the exchanges. The question is whether or not he can sustain control at UFC 280?

I’m expecting this fight to be very close. In the end, I do think Brady will land a couple of takedowns and have enough control to win at least two rounds. I don’t see a finish happening, but I see a very close fight with Brady remaining unbeaten.