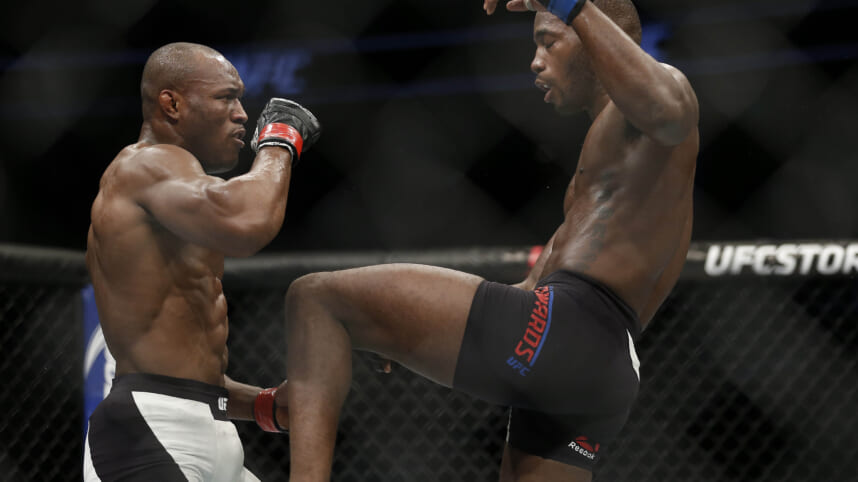 Tomorrow night in the main event of UFC 278, the welterweight title is on the line. Pound-for-pound king and current welterweight champion Kamaru Usman (20-1) takes on Leon “Rocky” Edwards (19-3, 1 NC) who is finally getting his shot at the title.

This shot for Edwards comes after he’s gone 9-0, 1 NC in his last ten fights. To be fair, the one No Contest was a fight that he was dominating against Belal Muhammad. His last fight came at UFC 263 where he put on a clinic against Nate Diaz. Granted, he did get hurt badly in the final minute of the fight.

The last man to defeat Edwards is the man that he’s meeting tomorrow night. Kamaru Usman used his wrestling to stifle Edwards in their first fight. That win was one of many that led Kamaru Usman to the UFC welterweight title.

Usman has been perfect inside the octagon and he’s looking for his sixth title defense tomorrow night. The last time we saw the champ was at UFC 268 when he had a hard fought win over Colby Covington in their rematch.

That’s how good he’s been. He continues to look better and better and that’s why he’s ranked atop the pound-for-pound list in the UFC. However, if there’s one man that can give him trouble given the overall skillset, you have to look at Leon Edwards.

Edwards has really tightened his game in terms of his grappling defense. He’s extremely well-rounded on the feet and he’s dangerous everywhere. He has good kicks, rangey shots, and good elbows. While he doesn’t have the power of the champion, he’s still very dangerous.

The champion has a few advantages in this one. Power is definitely in the corner of The Nigerian Nightmare. Wrestling and championship experience also weight heavy here. Kamaru Usman has been there and done that multiple times.

I actually think this fight is going to be very competitive. However, I think the raw power and ability to swtich to his wrestling is going to play really big for Usman tomorrow night. I think this one goes the distance with Usman getting his sixth title defense in a solid fight.