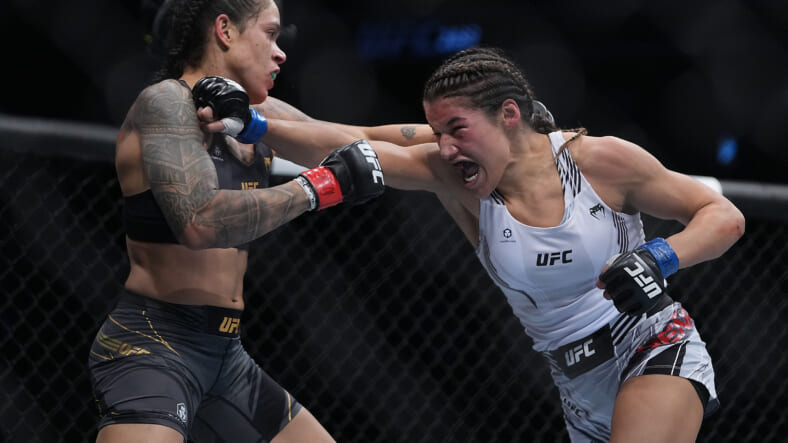 Tomorrow night in the headliner of UFC 277, we are going to see the highly anticipated rematch for the women’s bantamweight title. Champion Julianna Pena (11-4) will look to show the world that her first win was no fluke as she takes on former champion Amanda Nunes (21-5).

These two fought back at UFC 269 and let’s be honest, nobody gave Julianna Pena a prayer. Pena was one fight removed from being choked out by Germaine De Randamie and Nunes hadn’t lost since 2014 and was a two-division champion.

Nunes took the first round by just controlling Pena on the ground. In the second round, Pena took the fight to Nunes and showed that she wasn’t intimidated. You could see the demeanor change in Nunes and the former UFC champion started to get tired.

Pena started connecting on clean shots and the former champion had a look that turned to panic. Out of desperation, Nunes grabbed a clinch which led to Pena taking her down and forcing her to tap. One of the biggest upsets in UFC history and tomorrow night, they run it back.

If you look at the betting lines, many still believe that Pena’s win was a fluke. More about the lack of seriousness from Nunes versus the performance that Julianna Pena put on at UFC 269.

Here’s my take on the situation. Amanda Nunes is the better fighter skill for skill and frankly I don’t think it’s close. However, I believe that Julianna Pena is a gamer and I believe she has the advantage in terms of mental toughness.

Pena is a dog and she’s not going to back down from Nunes. For Amanda Nunes to win this fight, I think she needs a finish because Pena won’t stop coming after her. If she can’t finish Pena, I think Pena is going to get a late submission stoppage just like the finish we saw at UFC 269.

Now, what do I think is actually going to happen. I believe that Amanda Nunes is going to win. Could this be a Chris Weidman – Anderson Silva like situation? Sure, but I still am going to go with the better fighter. I think Nunes is better and I believe her better skills lead her to a finish in the second round tomorrow night.

Prediction: Amanda Nunes by TKO – Round 2