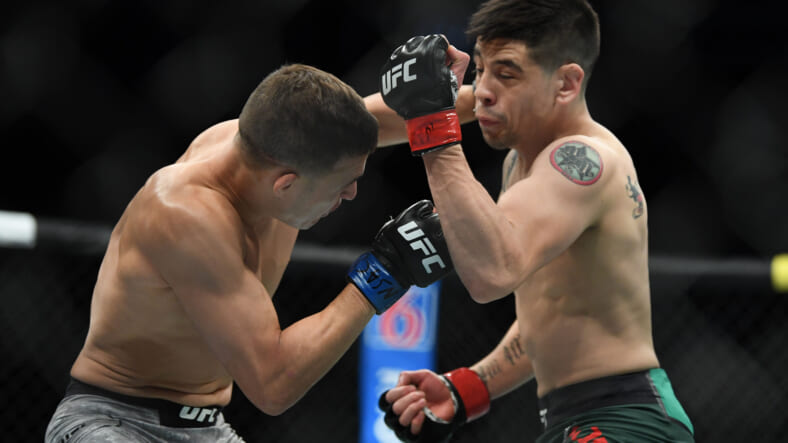 Tomorrow night in the co-main event of UFC 277, the interim flyweight title is on the line. Former undisputed champion Brandon Moreno (19-6-2) is back as he takes on a familiar foe in the surging Kai Kara-France (24-9).

Kara-France is coming in hot at UFC 277 on the heals of three tremendous victories. The last time we saw him was at a UFC Fight Night in March when he took on the previously unbeaten Askar Askarov and defeated him by decision.

Prior to that, he scored a knockout win over former UFC champ Cody Garbrandt. Kara-France looks better than ever and he’s going to be looking to avenge the loss that he took at the hands of Brandon Moreno back in 2019.

The former champion will be fighting an opponent not named Deiveson Figueiredo for the first time since November of 2020. Three straight fights for the UFC flyweight title against Figgy for Moreno and that series has gone 1-1-1.

Originally, Moreno and Figueiredo were being paired for a fourth fight. However, due to an injury to the champ, the UFC went in a different direction and booked these two for the interim title.

I think this fight is going to be absolute fireworks. For Kara-France, I think he’s going to try and lean on his power in this matchup at UFC 277. In Moreno’s last fight with Figueiredo, we saw him get hurt a couple of times.

We know that Kara-France is going to have pop in his shots as Cody Garbrandt found out personally. I would expect Kara-France to be big-game hunting in terms of Moreno’s chin. However, he can’t get overzealous as it might come back to bite him.

Brandon Moreno is fighting with a new camp for the first time this weekend. He trains under James Krause out of Glory MMA in Kansas City. I think we are going to see a refocused and dedicated Moreno.

I’m expecting Moreno to be the quicker man and I just think he’s going to beat Kara-France to the punch all night. Kara-France will have his moments, but over the course of five rounds, The Assassin Baby is going to do enough to get the win.