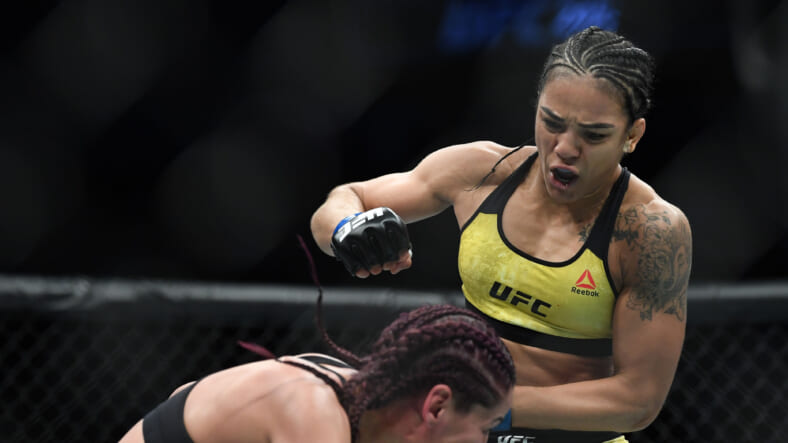 Tomorrow night on the main card of UFC 262 we will see a pivotal matchup in the women’s flyweight division. Top ten contenders will go head-to-head as Katlyn Chookagian (15-4) takes on the rising contender Viviane Araujo (10-2).

The Brazilian has won two straight since her decision loss to Jessica Eye at UFC 245. The last time we saw Araujo was back in January when she took on the tough and very durable Roxanne Modafferi.

To me, this was the best performance ofÂ Araujo’s career. She was poised and looked good against a fighter that makes it very difficult to look good. She’s looking to ride that momentum into UFC 262 and into title contention.

Katlyn Chookagian is without a doubt the third best flyweight in the UFC. Chookagian has been in the UFC since 2016 and she’s gone 8-4. However, her for losses were to two UFC champions and two former title challengers.

Since 2019, Chookagian has gone 4-2 with wins over JoJo Calderwood, Jennifer Maia, and Cynthia Calvillo. The Calvillo win came back at UFC 255 which was a nice bounce back win after she was stopped in the first round by Jessica Andrade.

The intriguing thing about this UFC 262 matchup is the striking. I really love the striking game of Araujo and I loved what I saw in her last fight. However, can she keep up with the activity and the pressure of Katlyn Chookagian.

Chookagian might not throw everything into her shots, but she’s going to have nonstop movement and action. She is extremely tough to beat when fights go to the scorecards. In my opinion, if UFC 262 goes to a decision this fight is Chookagian’s to lose.

I will know a lot early on in the first round. If Araujo has the power to really sting Chookagian, it can definitely be a good night for her. However, Chookagian has been in there with the very best and there’s a reason why she’s only lost to the best. I think she gets the decision nod tomorrow night.