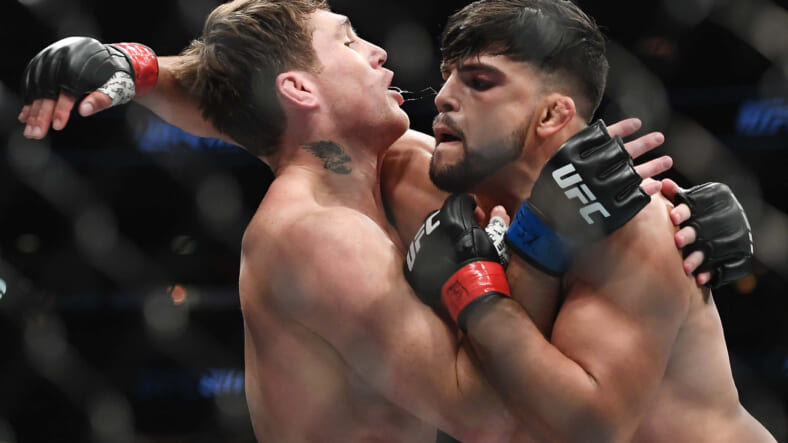 A big matchup in the middleweight division goes down tomorrow night at UFC 258. Former title challenger and Ultimate Fighter winner, Kelvin Gastelum (15-6), will be taking on Ian Heinisch (14-3).

Both men will make the walk at UFC 258 with a ranking by their name. For Ian Heinisch, he’s coming in at 15th. Heinisch was first introduced to the fans on Dana White’s Contender Series back in 2018.

The Hurricane earned himself a UFC contract with a knockout victory. From there, he would go on to have two impressive wins inside the octagon. That’s when the UFC gave him Derek Brunson. Brunson was able to show that Heinisch still had a ways to go in his career.

After Heinisch lost to Brunson, he dropped a fight to Omari Akhmedov. Heinisch decided to take some time before his next fight and really focus on his standup. It showed in his last fight when he knocked out Gerald Meerschaert. However, he is taking another big step up in competition at UFC 258.

Entering 2019, Kelvin Gastelum was looked at as one of the best middleweights in the UFC. He was actually set to take on Robert Whittaker for the title before Whittaker had to be out for a significant amount of time. Gastelum ended up fighting Israel Adesanya for the interim title.

While Adesanya won, Gastelum looked very good and gave Izzy the fight of his life. However, after that fight, Gastelum has lost back-to-back fights. He’s in desperate need of a win tomorrow to avoid his fourth straight loss in the UFC.

This matchup at UFC 258 is truly a crossroads matchup. In this fight, Gastelum will either get back on track or Heinisch will continue to ascend in the middleweight division. This fight has big implications for the division.

For Kelvin Gastelum, I think he needs to keep the fight at range tomorrow night. When Gastelum is on, we’ve seen him show off incredible striking and footwork. His boxing is extremely crisp when he’s on. He also has dynamite in his hands.

Heinisch needs to mix things up tomorrow to be successful. He needs to really work the low leg kicks and mix in some takedown attempts to keep Gastelum guessing. If Heinisch is able to take Gastelum down, he needs to keep wrestling him to win at UFC 258.

While many people are down on Kelvin Gastelum, I still believe he can be one of the best in the world. I think he’s going to have that turnaround performance he needs tomorrow. I’m expecting him to be sharp and land what’s needed to end his UFC losing streak.