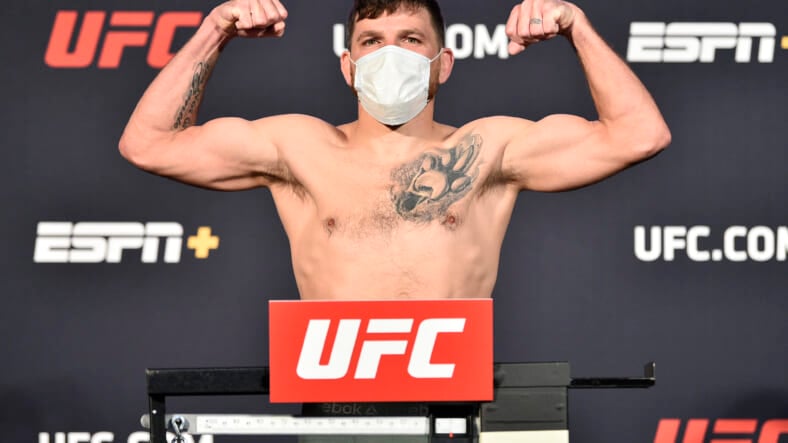 Tomorrow night on the main card of UFC 258, we will see a fun matchup between veteran lightweights. Jim Miller (32-15, 1 NC) and Bobby Green (27-11-1) will go head-to-head tomorrow night to kick off the PPV main card.

Bobby Green is coming off of a loss heading into UFC 258, however, 2020 was overall a big bounce back year for Bobby Green. A frustrated Green had gone back-and-forth about retirement given the way some decisions had gone against him in the UFC.

Nevertheless, Green decided to bite down on his mouthpiece and fight in 2020. He started the year off incredibly at 3-0. Green looked like he was inching towards a ranking before he lost a decision to Thiago Moises. Green’s looking to get back on track tomorrow night.

Jim Miller has been with the UFC since 2008 and he’s fought a who’s who of the lightweight division. If there’s been a top contender that’s emerged over the last decade, they’ve likely fought Jim Miller at some point.

Miller comes into this contest at 3-3 in his last six fights. One of those losses came against top contender, Charles Oliveira. Miller last fought at UFC 252 where he lost a decision to Vinc Pichel.

Both of these veteran lightweights are looking for a bounce back win at UFC 258. For Green to get the win tomorrow night, he has to stay loose with his striking and he needs to be careful of his front foot.

Given Green’s boxing ability and his wrestling skills, he’s normally very heavy on his front foot. This could be a problem against a guy like Jim Miller. Green needs to be a little more loose on that front foot and look to strike from the outside.

If he’s able to do some damage to the lead leg, then he can transition into his grappling. When it comes to the fight tomorrow night, I really like Bobby Green in this matchup. At this stage of their careers, I believe that Green will stay loose and score enough points from the outside to win a decision.