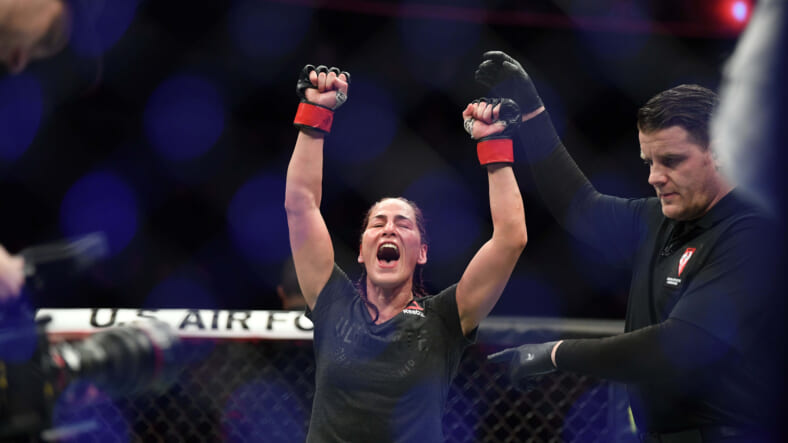 2020 certainly didn’t go as planned for JoJo Calderwood. Calderwood started the year believing that she was going to get a UFC title shot. In fact, the UFC booked her against Valentina Shevchenko (20-3) for the title in June.

However, Shevchenko ended up having a knee injury and the fight was delayed. Calderwood wanted to stay active and decided to take a fight against Jennifer Maia (18-7-1). This proved to be a massive mistake as she was submitted in the first round and lost her title shot.

Jessica Eye also didn’t have a 2020 that went according to plan. She ended 2019 strong with a big win over Viviane Araujo (10-2). However, she was then tasked with welcoming Cynthia Calvillo (9-2-1) to the flyweight division.

Eye didn’t look good at all in that fight and she lost a five round decision to Calvillo. That was the only time we saw Eye in the octagon in 2020. It’s worth noting that she’s still one of the UFC‘s best flyweights having only lost twice since moving up to 125.

This is a very intriguing matchup and I could see both of these ladies getting their hands raised at UFC 257. When it comes to the striking, I believe that Calderwood is going to have the advantage on the feet tomorrow night.

I believe she has a much more diverse attack especially when she mixes in her kicks. Jessica Eye has some pretty decent boxing, but we really don’t see her mix it up that much. That said, she does strike in bunches would could be key at UFC 257.

I don’t think either of these ladies is going to score a finish tomorrow night. To me, this is going to be a contest of who scores the most. If we stay purely at boxing range, I think Eye can pull this decision out.

However, I’m actually going to lean the other way in my prediction. I believe that Calderwood is going to come out with something to prove tomorrow. Maybe look for her to utilize the clinch and mix in her kicks. This fight will be close, but I’ll lean Calderwood on the cards.