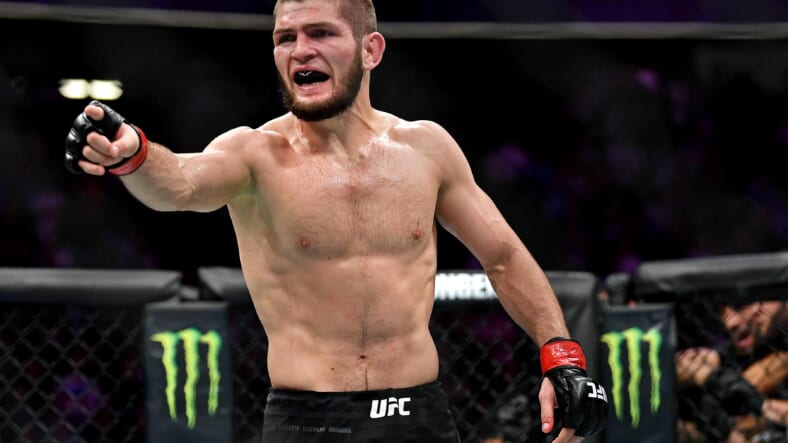 The UFC 254 main even is arguably the most anticipated fight of 2020. Undefeated lightweight king, Khabib Nurmagomedov (28-0), will defend his crown against the interim champion, Justin Gaethje (22-2).

This fight is trending to be one of the biggest UFC fights of all time. Khabib Nurmagomedov has become a global superstar since becoming champion. The dominant Russian is a rare fighter who’s level of domination is unheard of.

Nurmagomedov is so special because he tells his UFC opponents exactly what he’s going to do, however, they still can’t stop it. Khabib has ragdolled opponents like Dustin Poirier, Conor McGregor, Edson Barboza, Rafael Dos Anjos, and more on his run of dominance.

This year has been a tough year for Nurmagomedov. The UFC‘s lightweight champion lost his father who was also his lead trainer. This fight sees Nurmagomedov with a new motivation to finish the journey that he started with his father years ago.

2020 couldn’t have gone better for Justin Gaethje in terms of his fighting career. After the pandemic scrapped the Nurmagomedov – Tony Ferguson fight, the UFC called on Justin Gaethje. He went on to defeat Ferguson at UFC 249 to capture the interim title.

The Justin Gaethje that fought that night looked like the best lightweight in the world. His precision power striking along with his ability to stay composed was remarkable. Gaethje also has an All-American wrestling pedigree in his back pocket when he needs it.

The classic saying is that styles make fights. Stylistically, Justin Gaethje is the toughest opponent for Khabib Nurmagomedov in the UFC. Gaethje has incredibly good and powerful leg kicks which can zap anyone’s base very quickly.

In addition to that, he hands are very fast and powerful. It only takes one clean shot to hurt you with Justin Gaethje. On top of that, he’s an All-American wrestler who might be able to hold his own against the dominant UFC lightweight champion.

If Justin Gaethje can keep the fight standing the majority of the time, he’s going to win tomorrow afternoon. However, that would mean Gaethje would pull off something that nobody has been able to do in 28 fights.

Gaethje absolutely has the skills to get it done tomorrow. However, I find it hard to bet against Nurmagomedov. I think Gaethje is going to find some success early, but eventually, Khabib will be able to do what he does best as well.

When all is said and done tomorrow, I think later in the fight, Nurmagomedov will get it done. I think it will end the same way the last two fights with Nurmagomedov have ended. A takedown against the fence leading to a rear naked choke finish.