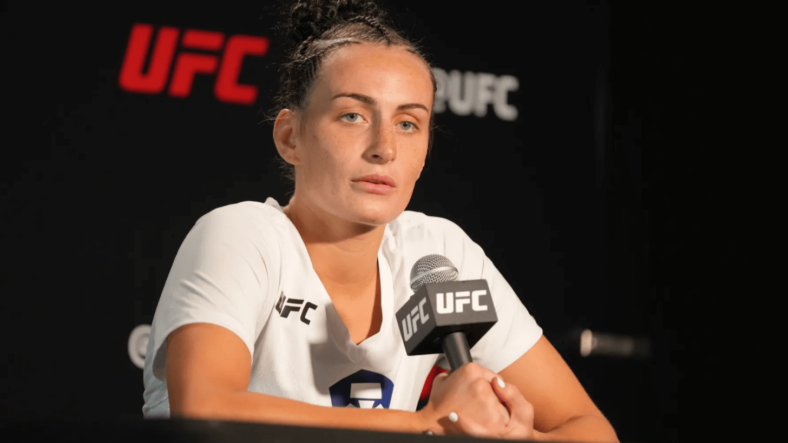 This year was a massive year for women in the UFC. This year, we saw Valentina Shevchenko continue her dominance. We saw Rose Namajunas regain her UFC strawweight title. Then we saw Julianna Pena stun Amanda Nunes at UFC 269.

So many incredible storylines in 2021 and it’s promising to be a big 2022 for the ladies in the UFC. There isn’t as much clarity at the top of the divisions as there was in 2021.

When the year started, Valentina Shevchenko, Amanda Nunes, and Zhang Weili stood atop the mountain and many viewed all three as unbeatable. Well, Weili was defeated twice by Thug Rose and Nunes lost in one of the biggest upsets of all time.

These storylines have made for a very compelling 2022. However, let’s take a step back from the very top of the mountain in regards to the women in the UFC. Instead, let’s take a look at two of the best prospects the promotion has entering next year.

Without question, my top UFC prospect entering next year is Casey O’Neill (8-0). O’Neill has been on an incredible run since she joined the promotion. She made her debut back in February.

This year alone, O’Neill has gone 3-0 inside the octagon and all three of her wins have come via stoppage. In her last fight, she stopped the champion’s sister, Antonina Shevchenko, in the second round.

O’Neill is already lined up for her first bout of the year in 2022. At UFC 271, O’Neill is going to get another test in the form of Roxanne Modafferi. If O’Neill scores another finish, she could be on the fast track to a title shot against Valentina.

My second top prospect entering 2022 is definitely Erin Blanchfield (8-1). We’ve only just been introduced to Blanchfield over the last couple of months. The 22 year old made her UFC debut back in September.

She was dominant in her first win, then she fought another top prospect in Miranda Maverick. The fight was close on paper, but Blanchfield ragdolled Maverick in a very lopsided fight.

Her dominance has been very impressive. The lone loss in her career came via split decision in a fight that could’ve easily gone her way. I’ve been very impressed with Blanchfield thus far and it truly looks like the sky is the limit.