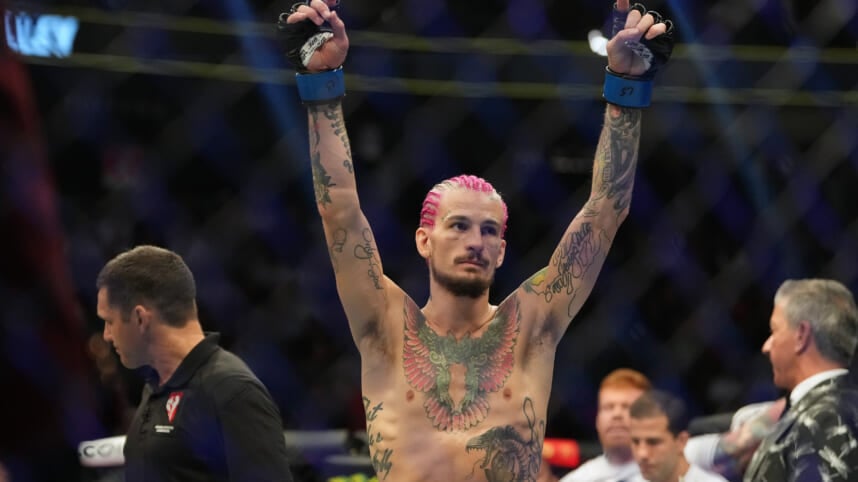 On the main card of UFC 280, we saw a pivotal title eliminator in the bantamweight division. Former undisputed champion Petr Yan (16-3) was looking to get back on track taking on the sensational “Suga” Sean O’Malley (15-1, 1 NC).

The last time we saw O’Malley was over the summer when he fought to a No Contest against Pedro Munhoz. It was a fight where O’Malley wasn’t looking great, but prior to that, he had three straight knockout wins. He was looking for the biggest win of his career tonight.

Standing in his way was the former bantamweight champion. Petr Yan is coming off a 1-2 stretch with both of his losses coming against Aljamain Sterling. Granted, one was a DQ loss in a fight he was in control of. Now, he’s focused on trying to get back to the title.

The UFC 280 bantamweight contest kicked off with a touch of the gloves. Yan immediately takes the center and O’Malley is trying to stay at range. Low kicks early from Yan. O’Malley working a lot of feints here in the opening seconds.

Yan has O’Malley back up against the fence. O’Malley lands a nice body kick and just evades a left from Yan. Huge body kick now from Petr Yan. Low kick from O’Malley. 1-2 attempt from O’Malley and Yan might’ve poked him in the eye.

Another nice 1-2 down the middle for O’Malley. Big right straight lands for O’Malley and Yan lands a body kick. Low kick from Yan. Stiff jab now from O’Malley. Yan shoots for a takedown and O’Malley is working to defend against the fence.

O’Malley doing a good job of staying up right so far. He breaks away then lands a left. Left counter from Yan. Double jab now for O’Malley. Left over the top from Yan. Three big lefts from Yan and he gets in deep on a double leg attempt. He slams O’Malley to the ground and settles into the guard.

Yan posturing up and O’Malley is trying to attack submissions. O’Malley uses the fence and gets back up. Low kick from Yan. Body kick from O’Malley. Nice combination at range from O’Malley. O’Malley now shoots for a takedown and gets the back as the bell sounds. Could’ve earned the round for O’Malley but it was a close one at UFC 280.

Yan gets rocked by O’Malley. O’Malley is heavy on his pressure. Now O’Malley gets rocked big time by Yan. Yan takes O’Malley down and everyone gets a second to take a break. Huge moments for both men, but Yan gets the better of it with this top position.

O’Malley trying for an armbar here. He scrambles to get up but Yan keeps him down. O’Malley once again uses the fence to get up and he eats a knee to the body. Another knee to the body for Yan and then they separate. Halfway through the round. Trip from Yan but O’Malley is right back up.

1-2 from O’Malley now. Both men have slowed down a bit after all that craziness. Beautiful jab from Petr Yan. Yan switching stances and lands a body kick. Another huge body kick from Yan lands. Double jab from O’Malley lands.

Yan back on the pressure. Left and a right for O’Malley. Yan blitzes and then moves to a takedown attempt. He has the hands locked and gets a takedown. Round comes to a close and it’s a round for the former UFC bantamweight champion.

O’Malley is really focusing on the jab to start the final frame. Low kick now for O’Malley. Body kick now from Yan and he just misses a haymaker. O’Malley is landing more in the first 90 seconds. Yan shoots in for a takedown.

O’Malley lands a knee that cuts him. O’Malley pouring it on now. Huge check hook from Yan. Both men are trading power shots. Flush head kick from O’Malley and Yan shoots for a takedown. This is a crazy pace in the final frame.

Two minutes to get and Yan gets the takedown. O’Malley using the fence trying to get up and he’s up. 90 seconds left in this one. They break and here we go. O’Malley pushing forward with a 1-2. Both men just miss with massive lefts. Big shot from Yan and he immediately chains a takedown attempt.

O’Malley scrambles and gets free. 30 seconds left. Two jabs from O’Malley. O’Malley pushes forward but gets taken down. The fight ends and it should go to Petr Yan but O’Malley should be proud of that performance.