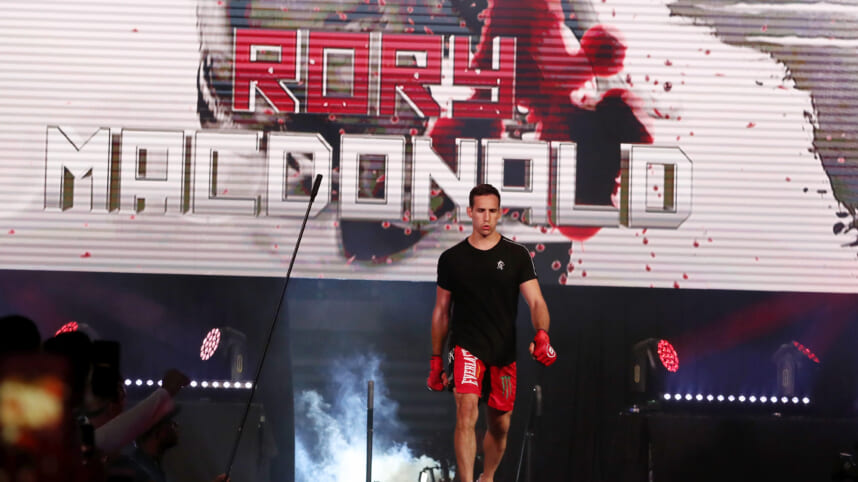 Over the weekend at PFL 8, Rory MacDonald (23-10-1) made the walk to try to book himself a spot in the season’s finals. MacDonald was taking on Dilano Taylor who was a last minute replacement for Magomed Umalatov who had visa issues which forced him off the card.

Nevertheless, MacDonald took the fight and tried to fight his way into the PFL finals. However, things would go bad late in the first round. As MacDonalds threw, he was caught with a huge right cross that sent him crumbling to the canvas. Taylor followed up and the referee stopped the fight.

For MacDonald, it was his second straight loss in PFL. Prior to the playoffs getting underway, he suffered an upset loss to Sadibou Sy by decision. He was hoping to shake that loss and book himself a spot in the finals, but it just wasn’t meant to be.

It was the second straight disappointing season for MacDonald in the PFL. After getting a first round stoppage in his opening bout in 2021, MacDonald ended the season with losses to Gleison Tibau and Ray Cooper III. 2022 went exactly the same way.

MacDonald started hot with a first round finish. However, that first win was followed by back-to-back losses. After this latest loss, many were wondering what was next for MacDonald. Well, over the weekend we got our answer and the answer is that it’s the end.

MacDonald retires from PFL and MMA

MacDonald posted a lengthy Instagram post announcing that he was walking away from MMA after coming up short in the 2022 PFL season. “The Red King” reflected on his career that started when he was just 14-years-old in his retirement post.

My time has come to put the gloves down for good. I’m so thankful for this sport and every person I’ve been able to meet along the way. I started this sport as a 14 yr old kid, i still remember my first day and knowing this is what i wanna spend my life doing. the passion for martial arts and becoming a pro mma fighter gave me hope and a way to a better life! and I’m so thankful to god for putting that gym toshido mma in kelowna in my path. it truly changed the direction of my life and saved me!

MacDonald looked like a phenom when he bursted onto the scene with the UFC. He looked destined to become a champion and almost did against Robbie Lawler. Had he been able to survive one more round with Lawler, MacDonald would have walked away with gold.

That being said, MacDonald would taste gold in his career under the Bellator banner. There he would cement himself as the face of a division for one of the premier promotions in the world. Following his Bellator run, he signed an exclusive deal with PFL.

MacDonald competed at the highest level in the UFC, Bellator, and PFL. While he only captured a world title in one organization, he made a good showing wherever he was.