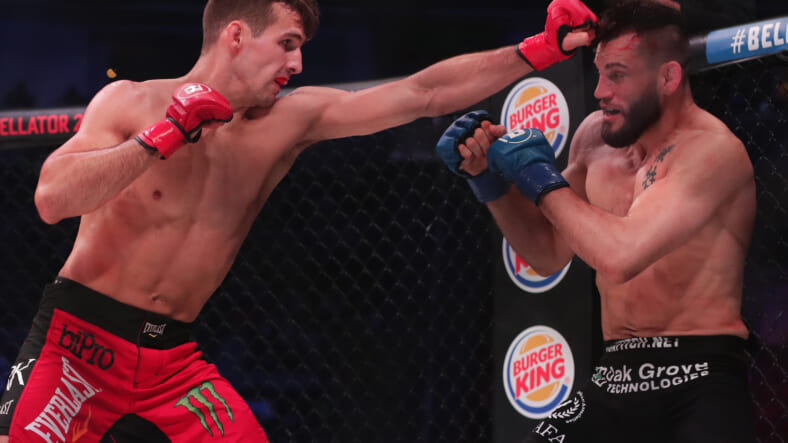 Tomorrow the PFL returns for their eighth card of the season and we will see the playoffs kickoff in two divisions. The welterweights and heavyweights will take center stage with a welterweight matchup headlining the event.

Former UFC top contender and Bellator welterweight champion Rory MacDonald (23-9-1) will be making his seventh appearance in PFL. He will be taking on Dilano Taylor (9-2) in this semifinal matchup. This is a huge opportunity for Taylor who steps in for Magomed Umalatov.

Taylor won his first bout of the season against Joao Zeferino after debuting in PFL in the Challenger Series back in February. His last bout came against Magomed Magomedkerimov and he was stopped in the second round.

Like Taylor, Rory MacDonald also lost in his last bout. The loss dropped MacDonald to 1-3 in his last four fights. Overall, he’s just 2-3 in his PFL run thus far. He’s going to try and avoid the Anthony Pettis path when he hits the cage tomorrow.

In addition to the welterweights, the heavyweights will be competing in the PFL Playoffs tomorrow afternoon. In the co-main event, Ante Delija (21-5) will take on Renan Ferreira (9-3). In the other heavyweight semifinal matchup, Juan Adams (10-4) takes on Matheus Scheffel (16-8).

Scheffel shocked everyone back at PFL 5 when he defeated former champion Bruno Cappelozza and snapped his winning streak. Prior to that, he had debuted for the season against Ante Delija and Delija scored the second round knockout.

Juan Adams won his lone bout of the season by second round TKO over Sam Kei. Originally, Denis Goltsov was supposed to have this spot, but after Visa issues caused him to miss the fight, Adams got this shot against Scheffel.

Then you have the featured heavyweight bout. Ante Delija was the runner-up last season and he’s wanting to leave no doubts that he’s the best in PFL this year. After he knocked out Scheffel, he defeated Shelton Graves to secure his spot in the playoffs.