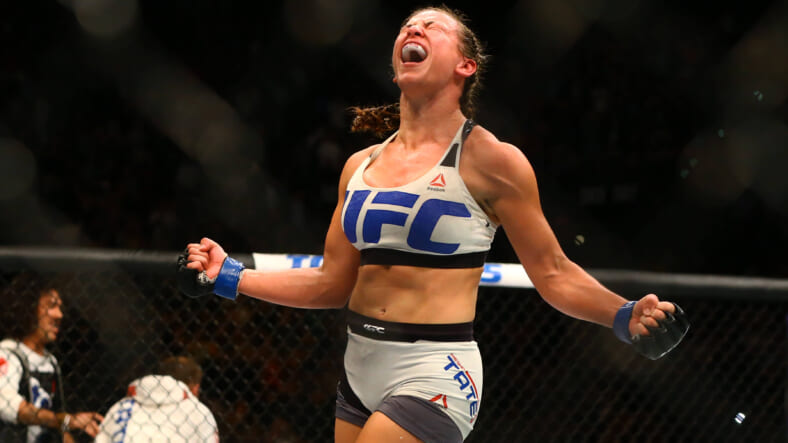 Today it was announced that the upcoming flyweight contest between Miesha Tate (19-8) and Lauren Murphy (15-5) has been moved to UFC Long Island on July 16th. Originally, the fight was supposed to take place this weekend at UFC 276.

This past weekend during the UFC Vegas 57 broadcast, the broadcast team announced the fight was off. While reasons were not given at the time, we’ve since learned that Murphy had a Covid issue that caused the fight to be pushed back.

The UFC kicked the tires on finding a replacement opponent for Tate who will be making her flyweight debut. They were not sure if she would be willing to move the fight back a couple of weeks given the potential strain on her weight cut.

However, Tate did agree to the new date and now the fight is officially moved back to UFC Long Island. For Lauren Murphy, she’s going to be looking to pick up one of the biggest wins of her career on the heels of losing to Valentina Shevchenko in a title fight at UFC 266 last September.

After years away from fighting, Miesha Tate made her return to the UFC last year. She won her return bout and then was booked in a main event against Ketlen Vieira. Ultimately, Tate fell short in that main event. Had Tate won, she was looking at being on the short-list of UFC title contenders at 135 pounds.

In addition to losing that fight against Vieira, something else happened which altered Tate’s path. Julianna Pena, who is a very close friend, shocked the world and became the bantamweight champion. After this happened at UFC 269, Tate mentioned that she might move down to 125 pounds.

Given how Valentina Shevchenko has run through the flyweight division, Tate could be fast-tracked towards the title. If she’s able to defeat Lauren Murphy in a few weeks, she’s going to get a shot at the UFC flyweight title.

If somehow Tate can pull it off, she would become just the second woman in history to win a belt in two weight classes in the UFC. However, that’s a long ways away and she’s got to get through the tough and durable Lauren Murphy first.