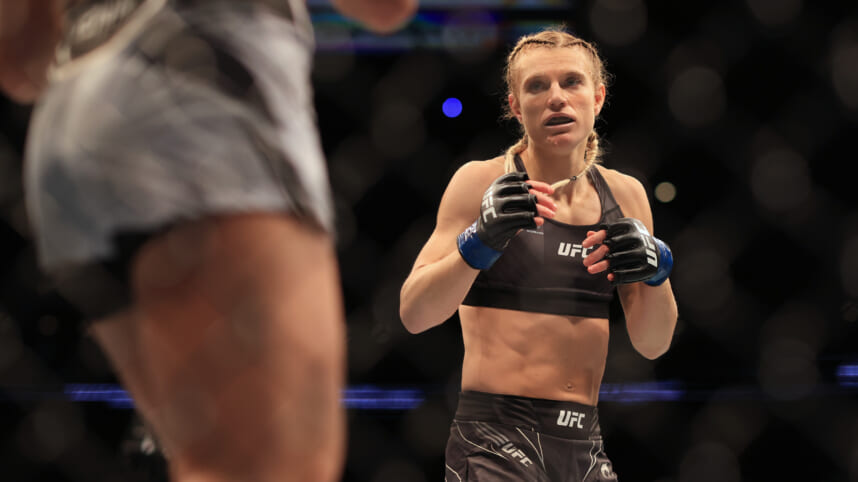 Kicking off the PPV main card of UFC 280 was a potential title eliminator in the women’s flyweight division. Top contender Katlyn Chookagian (18-4) was looking to hold her spot as she took on the surging Manon Fiorot (9-1).

After losing her professional MMA debut by split decision, Manon Fiorot has been perfect. Since making her debut in the UFC, she’s gone 4-0 and she was looking for the biggest win of her career tonight.

Katlyn Chookagian has become a bit of a gate keeper in the women’s flyweight division. Over the past few years, the only fighters to get the best of her are Valentina Shevchenko and Jessica Andrade. Meanwhile she’s turned back many surging contenders. She was looking to do the same at UFC 280.

Both ladies trade in the center. Another nice combination from Fiorot. Chookagian is doing good work with body kicks in the first 90 seconds. Low kick now from Chookagian. Side kick lands for Fiorot. Another nice side kick for Fiorot.

Fiorot pushing forward here. Chookagian is throwing a lot but not really landing at the moment. A couple of shots land for Fiorot. Fiorot lands nicely when Chookagian pushes forward. Good overhand right lands for Fiorot. Chookagian counters. Front kick to the body for Fiorot and a big head kick counter from Chookagian.

Fiorot pushes forward. Both ladies are not landing at a high rate here in the first round. Chookagian throwing with more volume which will likely win the round. Not much going on but I assume Chookagian is up 1-0 at UFC 280.

Entering the second and if the fight stays as is, it’s going to be an decision for Chookagian at UFC 280. Chookagian immediately goes back to pressure. Fiorot is opening up a little more early and lands a nice overhand right.

Side kick to the body for Fiorot and then they trade in the center. Right hand lands Fiorot and now she lands a beautiful 1-2. Chookagian is once again winning the volume battle but nothing serious is landing. Fiorot lands a nice check right hook. Side kick lands for Fiorot.

Fiorot is really fighting with pressure now. Straight left from Fiorot and she sat on that one. Body kick from Chookagian now. Jab from Fiorot. Another crisp combo lands for Fiorot who is really pulling away with this second round.

In this fight whoever is going first is winning. Fiorot has been going first all round. Another nice side kick from Fiorot. The second round comes to a close and it’s a clear one for Fiorot. 1-1 at UFC 280 on my scorecard.

Entering the final round and whoever wins this round will likely win the fight at UFC 280. Chookagian is the one that opens the final frame with pressure, but a quick combination backs Chookagian up. Stiff jab from Fiorot snaps Chookagian’s head back.