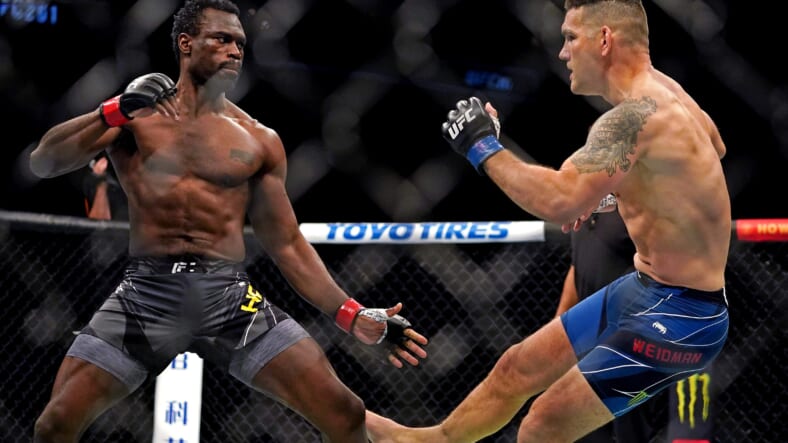 Tomorrow night at UFC 276, there are some seriously good fights from the beginning of the card all the way through the end. In fact, this might be one of the most stacked cards in recent memory when you’re looking at the early prelims.

One of the early prelims that I have my eyes on at UFC 276 is the women’s flyweight matchup between Maycee Barber (10-2) and former title challenger Jessica “Evil” Eye (15-10). Originally, Eye was supposed to face off with Casey O’Neill.

However, “King” Casey suffered a torn ACL and was forced off the card. Maycee Barber immediately jumped at the opportunity to slide in at UFC 276. Barber just picked up a decision win over Montana De La Rosa back in April.

It was the second straight win for Barber. Barber once had aspirations to be the youngest UFC champion in history. However, a torn ACL and losses to Roxanne Modafferi and Alexa Grasso set her back. However, she’s now training with Team Alpha Male and she’s looking for her third straight win.

Jessica Eye has had a rough go of it for the last few years. Eye always was a little undersized at bantamweight and when the UFC created the flyweight division, her career took off. Three straight wins including one over top contender Katlyn Chookagian earned her a title shot.

However, she was brutally knocked out by Valentina Shevchenko. Starting with the title loss, she’s just 1-4 in her last five fights. She enters UFC 276 on a three-fight losing streak. This fight is incredibly important for both fighters heading in vastly different directions.

Another fun fight to watch tomorrow on the UFC 276 early prelims is the middleweight contest between Uriah Hall (17-10) and Andre Muniz (22-4). For Hall, he’s going to be looking to bounce back after his lopsided loss to Sean Strickland last July.

Hall was on the best stretch of his UFC career. After having some success here and there, Hall went on a four-fight winning streak to earn himself a main event against Strickland. However, a timid Hall was overmatched in that one.

He’s looking to get back on track, but he might have his hands full tomorrow night. Andre Muniz has been perfect since he stepped foot in the UFC. Overall, he’s won eight straight fights heading into tomorrow night.

He earned himself a UFC contract on Dana White’s Contender Series. He made his debut in 2019 and so far he’s 4-0 inside the octagon. In those four wins, he has three submission victories including one over legend Jacare Souza.

Both men need a win tomorrow to start heading up the latter in the UFC’s middleweight division. This is such a good fight that could easily be higher on the card. This just goes to show the quality of the card tomorrow night.