Looking ahead to the 2022 PFL Championships 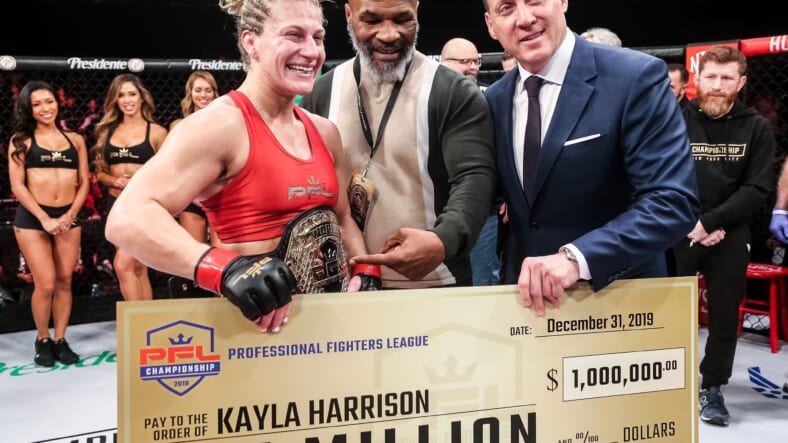 In November, the PFL will have their championship events with all six tournament finales crowning 2022 champions. While all the fights will be worth watching, there are a few that really stand out.

The obvious choice being Kayla Harrison (15-0) – Larissa Pacheco (18-4). Pacheco got her first big break when she made it to the UFC in 2014. However, the run didn’t go well as she was fighting at 135 pounds. She lost to future champions Germaine de Randamie and Jessica Andrade.

Pacheco then had a stint on The Ultimate Fighter which also didn’t go well. Then she made her way to the PFL to take on Kayla Harrison in Harrison’s fourth MMA fight. Harrison won that fight by decision. The two would then meet in the 2019 finals. Once again, Harrison got the nod by decision.

To this day, Kayla Harrison is the only fighter to defeat Larissa Pacheco in the PFL. Taking away her Harrison fights, Pacheco is 7-0 with six finishes all coming in the first round. She’s been incredibly dominant. Last year, she was the top seed entering the playoffs. However, a weight mishap caused her to lose her spot.

This year, she was once again the top seed. No opponent in the 2022 season has gone past three minutes with Pacheco, she’s on a collision course with Harrison for the PFL title and nothing was going to stop her.

Kayla Harrison has been begging for tough fights. She opted to stay with the PFL, but her career outlook has suffered due to the lack of true competition. Yes, she’s defeated Pacheco twice before, but this is true competition. I think Larissa Pacheco is one of the best fighters in the world.

Will that be enough to dethrone the champion? That remains to be seen. However, if anyone can do it, it’s going to be Pacheco. This is absolutely a must-watch for fight fans in November.

Brendan Loughnane (25-4) looked better than ever when he defeated Chris Wade to earn a spot in the PFL finals this year. Fighting in front of his home crowd in England, Loughnane showed the world that he’s ready for that PFL strap.

Standing in his way will be Bubba Jenkins (19-5). Jenkins has used his wrestling to have another impressive year in the promotion. He’s getting his shot at the top spot and he seems geared up to give Loughnane a run for his money.

Former top UFC middleweight Omari Akhmedov (24-7-1) has looked great in the light heavyweight division for PFL. He’s booked his ticket to the finals, but meeting him there is a man that hasn’t gone the distance once this year in Rob Wilkinson (16-2).

Stevie Ray (25-10) defeated former UFC champion Anthony Pettis twice to earn his spot in the lightweight finals. Standing in his way is a man who has yet to lose in the PFL in Olivier Aubin-Mercier (16-5). This is another one you’re really going to want to turn into.

The other finals feature heavyweights Ante Delija (22-5) – Matheus Scheffel (17-8) and surprise welterweights Dilano Taylor (10-2) and Sadibou Sy (12-6-2). Overall, it should be a tremendous night for the promotion in November. So many storylines and so many tremendous fights.