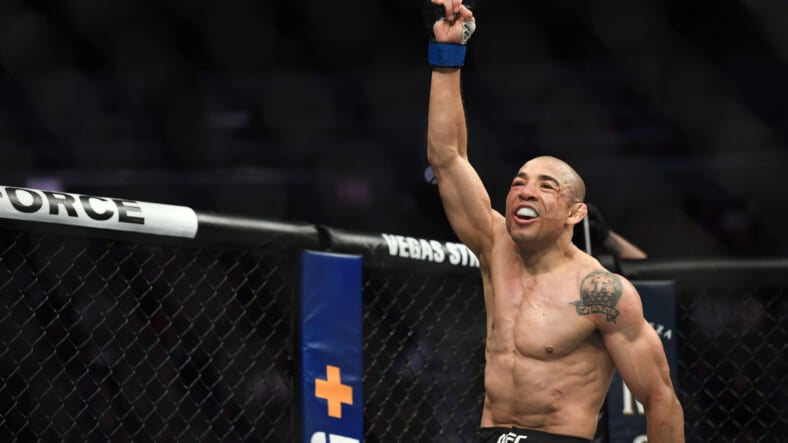 One of the greatest of all time is hanging it up. MMA Fighting reported and confirmed today that former UFC featherweight champion Jose Aldo (31-8) has decided to hang up his MMA gloves for good. The former champion had been pondering his future over the past few weeks.

Aldo had one more fight on his current UFC deal. However, the promotion agreed to release Aldo from that contract and the former champion decided that he was done with MMA altogether. At this point, it’s not clear what’s next for Aldo, but I wouldn’t doubt a venture into boxing which he’s always expressed interest in.

The last time we saw Aldo was just a few weeks ago at UFC 278. That night, he took on Merab Dvalishvili on the main card. Aldo entered the contest on a three-fight winning streak and was thought to be fighting for a title shot.

However, Merab’s wrestling attack was too much and Aldo really wasn’t able to get going. After the decision was read and Merab won the fight, he and Aldo embraced. Merab stated after the fight that Aldo told him that this was his final UFC run and he would be done after falling short.

Without question, Jose Aldo will go down in history as one of the best to ever do it. He’s one of the greatest fighters the UFC has ever seen and he’s on the shortlist for greatest featherweights of all time.

Aldo would become the interim champion one more time before falling to Max Holloway. He decided to move down to bantamweight and got one crack at that title where he ultimately fell to Petr Yan. No doubt about it, Jose Aldo will find himself in the UFC’s Hall of Fame. Probably will be inducted next summer.