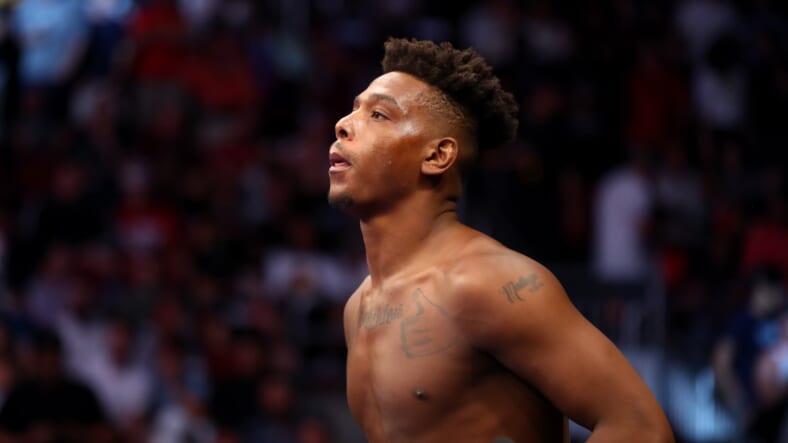 In the headliner of UFC Vegas 59, we saw a huge matchup in the light heavyweight division. Top ten contenders battled it out as former title challenger Thiago Santos (22-10) took on tenth ranked Jamahal Hill (10-1, 1 NC).

Jamahal Hill came into UFC Vegas 59 riding a ton of momentum off of back-to-back finishes of Jimmy Crute and Johnny Walker. This matchup against Santos was a good step up for “Sweet Dreams” and a challenge he was greatly looking forward to.

Like Hill, Thiago Santos’ last win came against Johnny Walker. However, that one win is surrounded by four losses. Starting with the Jon Jones fight where he tore his knee apart, Santos lost three straight. Then he won a decision against Walker before losing a lackluster decision to Magomed Ankalaev.

The UFC Vegas 59 main event kicked off with a touch of the gloves. Hill immediately takes the center and Santos starts working feints. Leg kick from Santos finds the mark to start the striking. Another powerful leg kick from Santos and then a brief takedown attempt.

Hill shrugs him off and he starts pressing forward. Lots of pressure from Hill and he paws the jab. High kick attempt from Santos draws a smile from Hill. Double jab lands for Jamahal Hill. Big left hook from Thiago Santos.

Another takedown attempt from Santos here. Santos is pressing Hill up against the fence halfway through the round. He’s trying hard for this takedown but Jamahal Hill is doing a good job of defending.

Santos tries pulling him away from the fence to get the takedown but still can’t get it. Nice knee to the body lands for Hill. Santos lands one of his own. They separate after a low blow and now they are back to distance.

Body kick lands for Santos. Hick kick attempt from Hill misses the mark and Santos lands a jab. Two straight low kicks from Santos. Double jab from Hill lands. Lots of pressure from Hill here at the end of the round. Round ends and it’s likely 1-0 Santos at UFC Vegas 59.

Entering the second at UFC Vegas 59 and there wasn’t a ton of action in the first. Hill takes the center and throws a big leg kick to start the striking. Another nice low kick from Hill and he doubles it up. Lots of leg kicks to start the round for Hill.

Both men trade high kick attempts. Jab from Hill and Santos counters with a jab and body kick. Takedown from Santos but Hill bounces right back up to his feet. Hill gets some separation and both men throw heat. Santos looks hurt briefly.

Hill starting to open up but now Santos is opening up as well. Both men trade big shots in the center. Santos is starting to look tired here and Hill is swinging with everything he has. He’s not being very efficient in trying for the finish and Santos seems to be okay.

Big left from Santos and an answer from Hill. Now Hill is looking tired. Both men are looking gassed near the end of the round. Big shots from Hill and Santos is looking tired and hurt. The round ends and Hill wins the round at UFC Vegas 59.

Entering the third at UFC Vegas 59 and you get the feeling like this fight could end at any time. They touch gloves and here comes the third. Low kick from Hill starts the action. Big body kick now from Hill and Santos shoots for a takedown.

He’s deep on this attempt and he gets Hill to the ground. Hill bounces back up to his feet but Santos is still on a double. Hill pummels and is trying to turn off the fence. However, Santos pulls him down to the ground.

Santos tries to get the back of Hill, but Hill slips out. Immediately, Santos goes right back on the takedown attempt. Three minutes left in the round and Santos is using a ton of energy here.

Santos holding a single and he switches to a double leg and gets the takedown. However, once again, Hill uses the fence to start getting back to his feet. Santos switches to the back and he’s heavy on the pressure here.

Hill gets back to his feet but can’t shake Santos. Two more quick takedowns from Santos and Hill is really having to work here. A few quick shots land for Santos. Nice knee from Hill and they separate. However, Santos goes right back on the takedown. The round ends and it’s a Thiago Santos round at UFC Vegas 59.

Entering the fourth at UFC Vegas 59 and Hill has to keep the fight standing. Hill plots forward to start the fourth round. Low kick from Santos starts the striking. Jab from Hill gets his striking going and it’s answered by a Santos body kick.

Nice left straight lands for Hill. Both men start biting down on the mouth piece and they are both throwing major shots. Huge shots land for both men and they wave the other on. Now the pace slows and Hill starts plotting forward again.

1-2 from Hill and a body kick from Santos. Again, both men start trading huge shots. Hill hurts Santos badly and Santos falls to the ground. Hill going for the finish and Herb Dean is close to stopping this.

Santos is trying to fight back. Huge shots from Hill and this one is over. Huge win for Jamahal Hill at UFC Vegas 59.