Israel Adesanya Has Looked Untouchable For A Long Time; But Can He Sustain His Reign Against A Familiar Foe In Alex Pereira? 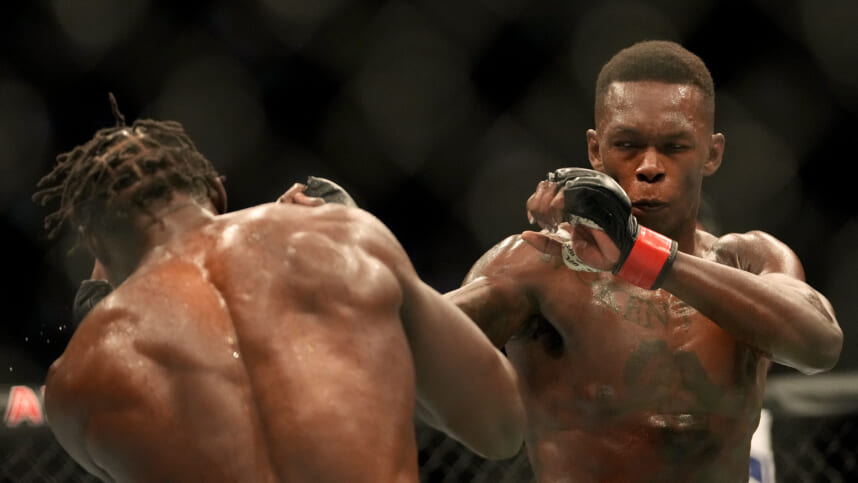 For over three and a half years, UFC Middleweight Champion Israel Adesanya has reigned over the division with authority as he continues to cement his legacy in mixed martial arts history. At 33 years old, Adesanya is now set on taking his greatness to new heights as he aims to secure his eighth straight title defense.

From one opponent to the next, Adesanya has not been easy to break through and has withstood many prominent middleweights over his time as champion. In fact, Adesanya defeated the number one ranked middleweight in Robert Whitaker twice, third-ranked Marvin Vettori twice, and most recently, Jared Cannonier.

Considering the makeup of the middleweight division over these last three years as well as the test of time, Adesanya has made fans, and UFC experts alike ponder the biggest question that has yet to be answered by any of his challengers: Is there any middleweight that can stop him?

Enter Alex Pereira. For those of you that don’t know, Pereira and Adesanya share some history. Prior to entering mixed martial arts years ago, both Adesanya and Pereira competed professionally against each other in kickboxing. And in two appearances between each other, Pereira came out victorious in both bouts, knocking out Adesanya in one of them.

Fast forward to the present, and Adesanya will now square off for a third showdown against Pereira, this time in the octagon. Pereira is one of the hottest mixed martial artists on the planet, possessing flat-out dangerous knockout power. But will history repeat itself once more for the 35-year-old Brazilian?

With UFC 281 just days away, let’s dive right into the full breakdown and prediction of the much-anticipated championship bout between Adesanya and Pereira.

Though Alex Pereira stepped into mixed martial arts a bit later in his life, he’s still risen into one of the scariest threats in the UFC. Standing at 6’4”, the 185-pound, number four-ranked middleweight possesses unreal power that has led him to secure two knockouts in his first three UFC bouts.

What’s remarkable about Pereira’s striking power is not that he hurls bombs or winds up big shots that are brutal to endure. It’s more about his ability to generate so much force with his brute strength and fluid strikes (leg kicks or punches) that make him incredibly dangerous. His blackbelt in kickboxing only reinforces that strength of his and poses a real threat against any opponent he faces.

But what works hand-in-hand with Pereira’s power is his sharp quickness and speed for his size. He reads strikes that come at him very well and like a cowboy in a duel, is ready to fire a counterstrike off the hip, be it with his legs or fists.

Lastly, Pereira is a tough, durable mixed martial artist. He doesn’t give you many windows to land your shots, to begin with, and even if you do, it’s going to take several repeated shots to break through him. He’s only suffered one loss in his MMA career, and that was by submission back in October 2015.

That said, Pereira shouldn’t walk into this fight thinking it’s going to be déjà vu of what happened so many years ago. Adesanya is technically gifted and one elite specialist at luring in opponents to a world of trouble if they overcommit.

In addition, Pereira has never fought in a four or five-round fight in the UFC. And should it enter the championships rounds, his endurance could be thoroughly tested and infringe on how he executes.

The Last Stylebender has established himself as one of the greatest UFC mixed martial artists of all time with an undefeated Middleweight run that’s been emblematic of the legendary Anderson Silva. There’s good reason why he sits second on the men’s pound-for-pound rankings as he looks to push himself into the number one spot with a win over his most dangerous challenger to date.

What sets Adesanya apart from just about everyone else he’s faced comes down to a combination of factors. The first and most popular is his technicality as a striker and, with it, the precision he delivers. Adesanya is an expert at chipping away at his opponents with repeated, sharp strikes that open them up for his critical shots.

Tied into his technicality is Adesanya’s quickness and agility, making it very difficult for his challengers to land significant strikes on his head or body area because of how well he maneuvers. To go along with his ability to counter at a remarkable speed, Adesanya also comes with incredible balance that allows him to be elusive and position himself in the best ways possible to deliver the strikes he’s after.

In addition, Adesanya is not only a world-class kickboxer, a sport he dominated in prior to stepping foot into mixed martial arts. But he also has a purple belt in Brazilian Jiu-Jitsu, proving that if the fight winds up on the ground, he can hold his own. Add in his 80” reach, and Adesanya is simply very tough to get to, more or less, knockout.

But what Adesanya will need to be cautious about in this championship bout is that Pereira matches up with him very well, from his height to his reach (79”). Moreover, Pereira also loves to pressure his opponents with a calculated pace and comes with the most dangerous knockout power in the division right now.

With the added mental game that Pereira brings (considering the history they share), Adesanya is up against his most difficult opponent of his career and will need to bring his very best if he plans on walking out of the octagon victorious.

When it comes to assessing Adesanya’s career, there’s not many things you can criticize about him because of how dangerous and consistent he’s proven to be as the Middleweight champion for the last three and a half years.

That said, there’s a big reason why this Saturday could mark the end of his reign, be it for a brief time or for good. If you look over Adesanya’s career, especially prior to when he joined the UFC, the man was a knockout artist. From the moment he started his mixed martial arts career in 2012 all the way to his UFC debut against Robert Wilkinson in 2018, Adesanya knocked out 12 straight opponents, leaving nothing for the judges to decide.

Since he knocked out Wilkinson in 2018, Adesanya has completed 11 middleweight bouts, eight of them have resulted in decision rulings, while just three have ended in knockouts. The drop in knockouts is a stark one. On the contrary, could you make a case that fighting in the UFC can humble one’s ability to secure knockouts, considering the increase in talent? Absolutely, particularly in competitive divisions stacked with elite fighters.

But that hasn’t been the case for Adesanya since he set foot in the middleweight division. Aside from taking on a well-rounded Robert Whittaker twice, a durable Jared Cannonier, and an underrated Kelvin Gastelum, the rest of Adesanya’s opponents have been nothing particularly special. He defeated Marvin Vettori twice by decision, which was far below his expectations, he exposed how inadequate Paulo Costa was as a contender, and he didn’t even come close to knocking out either Anderson Silva or Yoel Romero, who he fought both well out of their respective primes.

The overall point I’m alluding to here is that Adesanya hasn’t been properly challenged by a well-matched competitor in this middleweight division up until this year. And not only does Pereira match his seize, reach, and kickboxing talent, but he also brings a difficult style to contest and unrelenting knockout power that Adesanya is all too familiar with. Since he set foot into the UFC octagon, Adesanya has never faced an opponent like Pereira, which is why this challenge is his greatest to date.

The only obstacle for Pereira comes down to endurance and how he would fare in the championship rounds of the bout. Pereira has never been in a four or five round fight, and it could certainly test his stamina.

However, the key reasons for why Pereira wins this fight is that Adesanya will need to break him with more than just his technicality, and that’s something we just haven’t seen Adesanya do often with far less talented opponents. In addition, Pereira will pressure him with lethal strikes, and Adesanya will need to produce viable answers in return that consist of more than glancing leg kicks. From power to precision, Pereira doesn’t miss when he lands his detonating strikes, something he illustrated firsthand against Sean Strickland.

Don’t get me wrong, Adesanya could very well win this bout and is the projected favorite. But with Pereira being just as strong, just as talented with his striking, and even more powerful, it’s going to have to be all or nothing for Adesanya. History has an interesting way of repeating itself at times, and Adesanya will need a miracle to come away with a victory on Saturday.