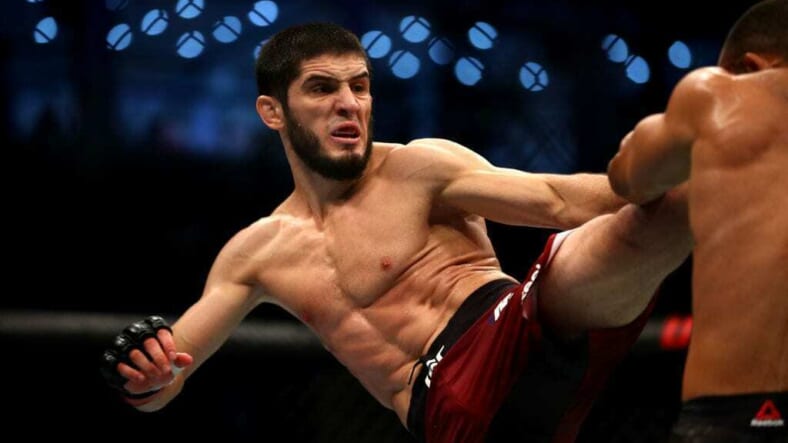 UFC Vegas 14 has lost it’s main event. Tonight it was announced that Islam Makhachev was forced to withdrawal from next week’s main event against Rafael Dos Anjos. The news was first reported by ESPN’s Brett Okamoto.

This fight was originally supposed to take place at UFC 254. However, due to RDA testing positive for COVID-19, the fight was moved to next weekend where it was going to headline. Now, the promotion is forced to scramble.

UFC Vegas 14 was not the strongest card on paper. It’s not an easy card to just slide the co-main event into the main event slot. However, the promotion does have options. ESPN is reporting that the UFC is trying to find a replacement opponent to keep Dos Anjos in the main event.

This is a tough break for fight fans who were excited to see Makhachev fight a guy like Dos Anjos. The former UFC lightweight champion has already been campaigning for his new opponent. He seems interested in fighting Michael Chandler.

I wish @MAKHACHEVMMA a speed recovery. Looking for a new partner to dance. Looks like @MikeChandlerMMA is ready to go. Your move!

As you can see, RDA is very interested in having the UFC book him against Michael Chandler. However, I don’t think the promotion will make that happen. Many wanted to have Chandler face Makhachev after RDA fell out, but the promotion has different plans for Chandler.

That being said, I’m not sure who the UFC will try to pair up with Dos Anjos. They will likely look at fighters who compete at lightweight and welterweight for this main event slot. However, it’s going to be difficult to get a big name with just six days notice.

We will continue to monitor what the UFC is planning on doing with the main event next week. This is a really tough blow for both guys and for fans who were excited to see the matchup. I’m sure the promotion is going to be working very quickly to get a new opponent for RDA.