Is Bellator’s Patricio Pitbull on the same level as Alexander Volkanovski? 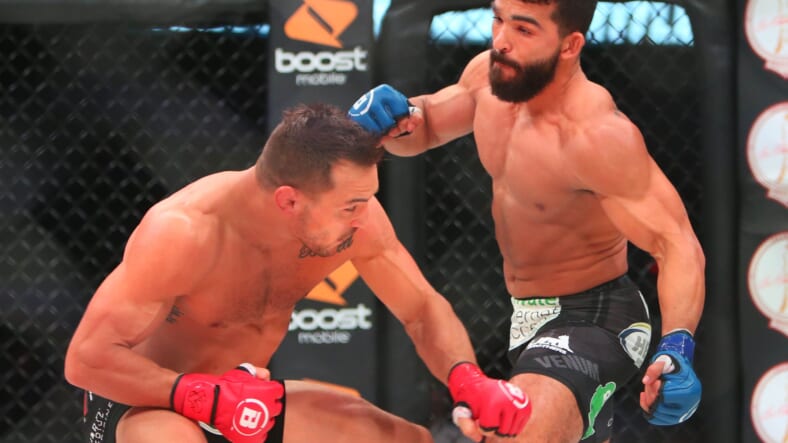 Last weekend at Bellator 255, Patricio “Pitbull” Freire (32-4) choked out Emmanuel Sanchez in the first round of their title fight. The matchup was also the semi-final matchup in Bellator‘s Featherweight Grand Prix.

After the fight, Patricio Pitbull and his management have talked about how he’s the best featherweight in the world. They told ESPN’s Ariel Helwani this week that they are more than willing to take on the UFC champion, Alexander Volkanovksi (22-1).

A huge feather in the cap of Pitbull is his knockout of Michael Chandler. Chandler is getting ready to challenge for the vacant UFC lightweight championship and Pitbull knocked him out in the first round after catching him with a looping hook around the ear.

Granted, the stoppage was premature in my opinion, but nevertheless, that’s how Patricio Pitbull became a two-division Bellator champion. With that said, is Patricio Pitbull on the same level or is he even better than the best the UFC has to offer?

This is yet another time where we are comparing the two biggest MMA promotions. Is Bellator on the same level as the UFC? 99% of the time the answer to that question is going to be an emphatic no.

However, Patricio Pitbull is a very special fighter and many believe he is one of if not the best featherweight in the world. At the same time, I think it’s very important to remember the competition level here.

Let’s take a look at the last four wins for the UFC champion. Volkanovski has defeated Max Holloway twice, Jose Aldo and Chad Mendes. That is quite astonishing considering how great all three of those fighters are.

The last five wins for the Bellator champion include Emmanuel Sanchez twice, Juan Archuleta, Pedro Carvalho, and Michael Chandler. Archuleta is the bantamweight champion and Carvalho and Sanchez are not on par with UFC competition.

I will give the Bellator champion all the credit in the world for the Chandler win. That is by far the best win of his career. However, I just can’t say that Patricio Pitbull is better or even on the same level as Alexander Volkanovski.

ESPN’s divisional rankings have this one right. They have the Bellator champion in fourth behind Volkanovski, Max Holloway, and Brian Ortega. I think that’s where he should be. I believe he could be a top five fighter in the UFC, but in my opinion, he wouldn’t be the best.