Holly Holm out, Aspen Ladd in against Norma Dumont at UFC Vegas 40 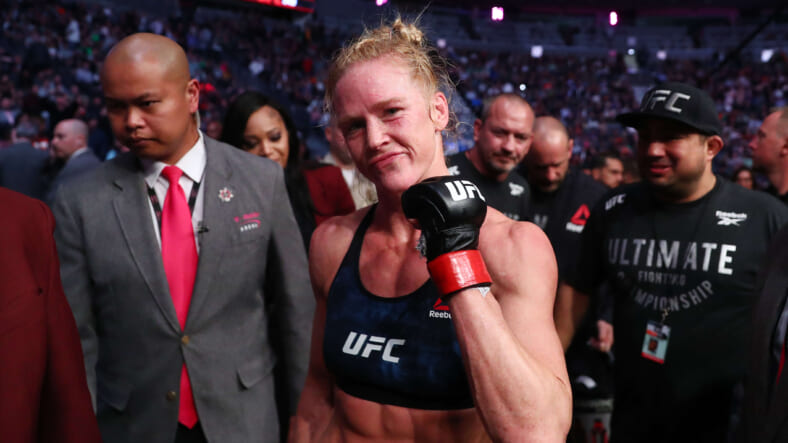 UFC Vegas 40’s main event is changing once again. Originally the promotion was planning on next weekend’s card being headlined by Miesha Tate and Ketlen Vieira. However, the UFC scrapped that after Tate tested positive for Covid-19.

From there, the UFC shifted the featherweight contest between Holly Holm and Norma Dumont (6-1) as the main event. However, we learned last night from Ariel Helwani that Holly Holm has injured her knee and is out of the UFC Vegas 40 main event.

Holm’s injury is not considered to be severe. The former champion is wanting to get back into the cage either at the end of this year. The UFC has already moved on from this news and they’ve found a replacement for Holm.

ESPN’s Brett Okamoto was the first to report last night that the UFC has tabbed Aspen Ladd (9-1) as the replacement for Holm. Ladd was supposed to fight last weekend at UFC Vegas 38, but her fight was cancelled after an alarming weigh-in where Ladd came in heavy.

Aspen Ladd has been considered to be one of the top female prospects in the UFC since making her debut a few years ago. Her lone loss came against former UFC champion Germaine de Randamie.

However, outside of that loss, she’s been sensational. Now, we haven’t seen Ladd compete in almost two years. She’s always struggled to make 135 pounds. That was evident last week when she tried to hit the scales.

She’s not going to have to worry about the weight which might produce the best Aspen Ladd we’ve ever seen. That said, she’s going to have a tall order in front of her next weekend.

Norma Dumont will come into UFC Vegas 40 having won back-to-back fights since losing her promotional debut. Her last win was a victory over former title challenger Felicia Spencer. If she’s able to defeat Ladd next weekend, she could perhaps only be a win away from giving Amanda Nunes a new featherweight contender.