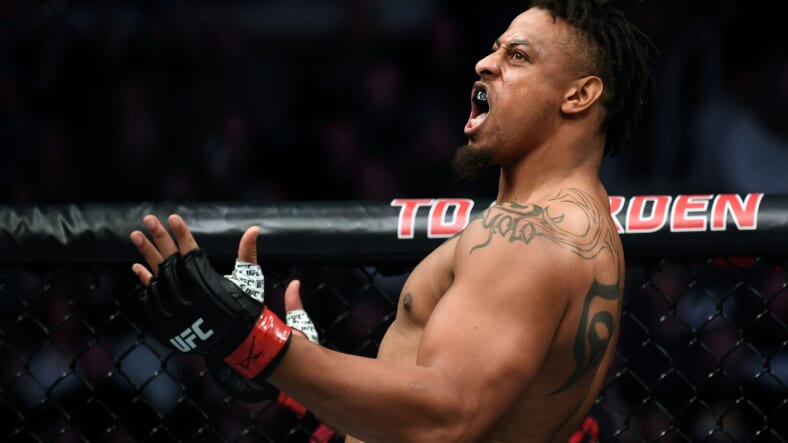 Last weekend at UFC Vegas 17, Greg Hardy (7-3, 1 NC) was looking to pickup his third straight win inside the octagon. Hardy had competed twice in 2020 and won both of his fights against Yorgan De Castro and Maurice Greene.

The order in front of him was to defeat Marcin Tybura (21-6). Tybura was bringing his own winning streak into the octagon having won three-straight UFC fights. The winner was expected to break into the UFC‘s top 15.

In the first round, Greg Hardy looked fantastic. His hands looked extremely crisp and he was busting Tybura up. I was also really impressed with the pace of Greg Hardy. He didn’t seem to be going crazy and he was staying composed.

Hardy was picking his shots and tying together combinations that were landing. However, Tybura wasn’t going away. When the fight went into the second round, there was a massive difference in Greg Hardy.

Hardy did well in the first half of round two, however, he was fading extremely fast. Tybura was able to get Hardy to the ground later in the round and the fight didn’t last long after the fight touched the ground.

Hardy was extremely tired and Tybura started throwing big shots from half guard. There was no fight put up from Hardy and the referee called a stop to the action and Greg Hardy suffered his first loss by stoppage at UFC Vegas 17.

It’s becoming very clear that cardio is an issue for Greg Hardy. In his UFC fights, we’ve seen that he has very solid technique with his hands. His technique and his overall ability is getting better every single day.

However, the cardio is something that’s not. Hardy is a very big heavyweight who has to cut down to the heavyweight limit of 265 pounds. In his previous UFC fight, he actually missed weight on the first attempt.

Carrying the amount of muscle that he does and going through a weight cut compromises his cardio. Not too mention that Hardy also deals with asthma which of course doesn’t help his cardio. Hardy had a win overturned to a no-contest because he used an inhaler in between rounds.

I’m very impressed with the technical advancements Hardy’s made over the last couple of years. However, to make that next jump, he needs to alter a few things. I really believe that Hardy needs to shed a little muscle and trim down.

He needs to get himself to a weight where he can fight for more than five minutes without appearing exhausted. If he cannot improve his cardio, he’s never going to reach the elite levels in the UFC.