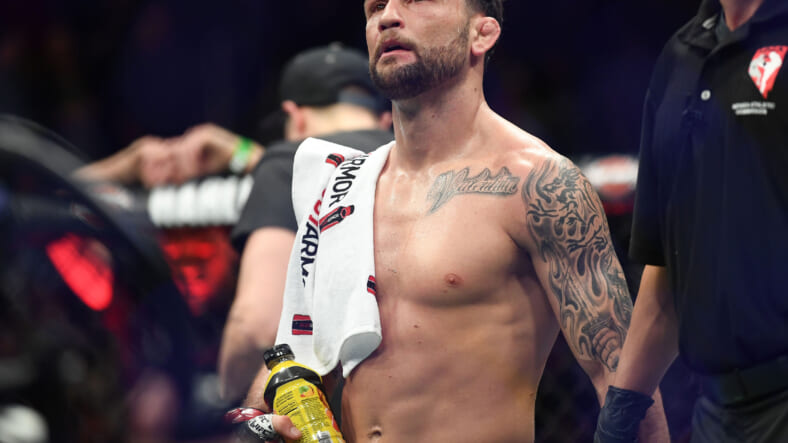 One of the legends of the UFC is gearing up for the end of his career and it looks like he will fight just one more time. That fighter is former lightweight champion Frankie “The Answer” Edgar (24-10-1). Edgar talked with ESPN over the weekend and voiced his desire to ride off into the sunset.

However, Edgar is wanting one more fight before he hangs it up. He wants that fight to come at UFC 281 in November which will be near his home in New Jersey. Fighting at Madison Square Garden would be the perfect way for Edgar to wrap up his Hall of Fame career.

The last time we saw Edgar was at UFC 268 which also went down at Madison Square Garden. That night, he took on Chito Vera. Edgar got off to a really good start and won the first round. However, Vera really started to take over in the second round and ended up knocking Edgar out in the third.

The loss dropped Edgar to 2-5 in his last seven fights and he was knocked out in four of those losses. The 40-year-old Edgar was fighting for the third time at bantamweight. After becoming the lightweight champion and challenging for the featherweight title, Edgar saw one more title run at 135.

However, it wasn’t in the cards and now, he’s eyeing the end of his career. He did tell ESPN one opponent that he has in mind for his final fight.

Edgar said that he likes the idea of fighting Dominick Cruz in his final fight. Personally, I’ve wanted to see this fight for a long time. A lot will depend on what happens next month when Cruz takes on Chito Vera in the headliner of a UFC Fight Night.

If Cruz wins that fight, he won’t be fighting Edgar next. He’ll likely be a title eliminator and won’t take a step back. However, if Cruz were to lose to Vera, then the fight with Edgar makes a lot of sense for both men. Let’s say that Cruz pulls off the win, who else could the UFC pair Edgar with?

There are a couple of options that could make sense. One would be pairing Edgar up with Sean O’Malley. This fight might not make sense on the surface, but O’Malley hasn’t moved up the rankings to take on top UFC competition as of yet. I could see him taking the Edgar fight to try and get a key win.

Another option would be running it back with Pedro Miunhoz. These two had a razor close fight with Edgar winning a split decision. I could see them running it back next. What do you think? Who should the UFC pair up with Frankie Edgar?