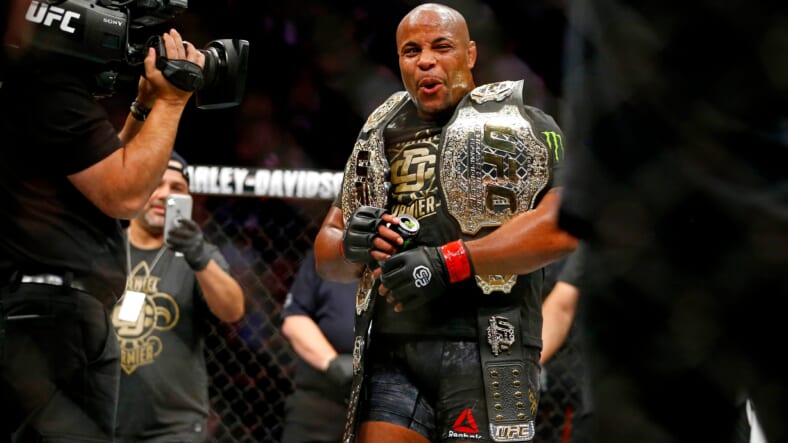 Daniel Cormier (22-3, 1 NC) made it clear leading up to UFC 252 that he would be walking away following his fight with Stipe Miocic (19-3). Cormier went on to lose a unanimous decision to Miocic back on August 15th.

The former two division UFC champion told Joe Rogan in a post-fight interview that he would only fight again if it was for championships. That of course seemingly cracked the door on a potential return for Cormier.

Today, Cormier returned to his ESPN show with Ariel Helwani. Helwani simply asked the former UFC champion if he was done. Cormier replied with, “Yeah, I’m not going to fight anymore.”

Cormier continued, “I told Joe Rogan after the fight that I was only interested in fighting for championships…I’ve lost two fights in a row for the first time in my career. You have to understand when it’s time.”

DC went on to talk about the fact that he might have been hit with the right hand by Miocic at UFC 252 that dropped him in the second round was, “Because I’m older.” Cormier will be turning 42 years old next March.

Initially, Cormier didn’t want to fight in the UFC past his 40th birthday. Of course, the potential fight with Brock Lesnar kept him going. The fight never materialized and Cormier agreed to giving Miocic a rematch after DC won the belt from him at UFC 226.

When DC was finished by Miocic, he said that he couldn’t walk away after that performance. He waited for Miocic to heal up and the two rematched at UFC 252. Losing twice left Cormier no where to go and at 41 years old, he acknowledged that it’s time to move on with his life.

DC is truly one of the best fighters to ever do it. Unfortunately for him, he fought as the same time as Jon Jones and Stipe Miocic. Those two men had Cormier’s number when no one else could solve his puzzle. Cormier will no doubt go into the Hall of Fame as a former two division UFC world champion.

I do feel bad for Daniel Cormier. There people who do not put a ton of stock in his UFC light heavyweight title run since he never defeated Jon Jones. There are also now people questioning his first win against Stipe having lost twice to Miocic. People have said the shot might have been pure luck.

At the end of the day, Cormier won the heavyweight title clean. When Jones was out, he beat every man at light heavyweight to capture the title. While pundits can always talk, there is no questioning the legacy that Daniel Cormier will leave inside the octagon.