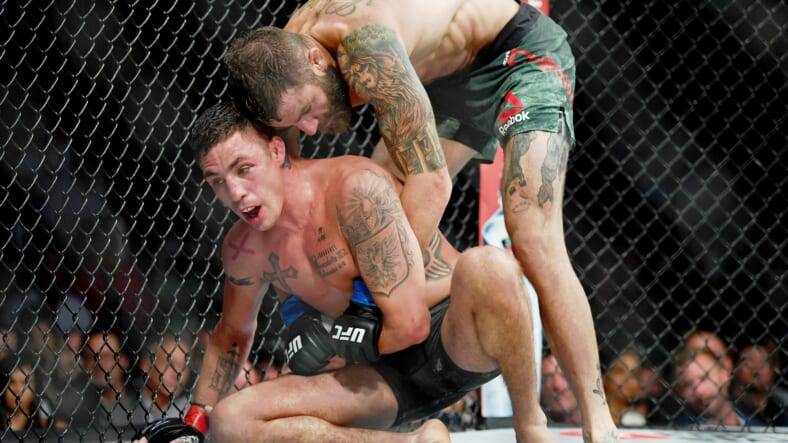 This fall out between Diego Sanchez (30-13) and the UFC is something that’s concerning and extremely sad. The story continues to turn and everyday it seems like there is something new that comes out or is said that makes this story even more alarming.

Let’s start at the beginning. Diego Sanchez was set to fight Donald Cerrone this weekend at UFC Vegas 26. The fight was supposed to be Sanchez’s last fight and he would retire after it was over.

Sanchez’s manager/coach Joshua Fabia called the UFC a couple of weeks ago and asked for detailed medical records over the course of Sanchez’s career. The way it was worded is that Fabia wanted to see the impact that fighting has had on Sanchez’s life now that he’s transitioning out.

To me, it sounded like Fabia was trying to lay the ground work for some kind of lawsuit after the fact. Nevertheless, Fabia told the UFC that they were just wanting his medical records for potential medical treatments after he leaves the organization.

After some email exchanges back-and-forth, the UFC pulled Sanchez from the fight. In addition, they also released the former Ultimate Fighter winner from his contract. That said, they paid Diego Sanchez his full show and win money for Saturday night.

Sanchez is worried the UFC will come after his life

After Sanchez was released, the story continued to spiral. Sanchez posted on his Instagram a video of a fighter meeting from Fight Island. The UFC commentators were just talking with Sanchez about his upcoming fight and his career.

Fabia stormed in at the end and started going off about bias commentary against Sanchez. Following that video, Sanchez also posted the recorded phone call between Fabia and the UFC’s legal team.

Sanchez appeared on MMA Today where he talked about the situation. He stated that he is fearful of his life for speaking out against the UFC. Here is his quote:

“Iâ€™m going to tell you guys frankly, right now, Iâ€™m fearful for my motherf*cking life. Iâ€™m fearful that this company, this billion-dollar monopoly company worldwide is going to come after me. Something might happen to me in two years, maybe in a couple years. Maybe I wreck my truck. Maybe, â€˜Oh, Diego overdosed, some suicide sh*t.â€™ I donâ€™t know, but I would not put anything past the level of evil that is within this corporation.â€

In addition to those comments, Sanchez also talked about UFC President Dana White. White has been very vocal about how much he cares about Sanchez, but Sanchez doesn’t seem to feel the love from White.

“Iâ€™m going to say this to Dana White: Dana, whatâ€™s up, Dana? Whatâ€™s up, Dana? Man, I tried for two years to get a meeting with you. Oh sh*t. I was the first â€˜Ultimate Fighter.â€™ Didnâ€™t that show do something for the company when it was $60 million in debt? Oh, all those â€˜Fight of the Nightâ€™ (bonuses). All that TV time (on) Spike TV, Fox TV, ESPN, all of them, and you canâ€™t meet with your boy? Iâ€™m there in Vegas training. Iâ€™m going to Vegas, and Iâ€™m training there weeks on weeks on weeks. I put 60 to 70 weeks in the UFC PI, just to try to get a meeting with you, Dana. Just to try to meet you in crossing.

This situation is incredibly sad and honestly, I feel like the one person to blame here is Joshua Fabia. Anyone you talk to in the business has nothing but horrible things to say about the guy. I believe the UFC wanted the best for Diego Sanchez, but at the end of the day, he’s a grown man who makes his own decisions.