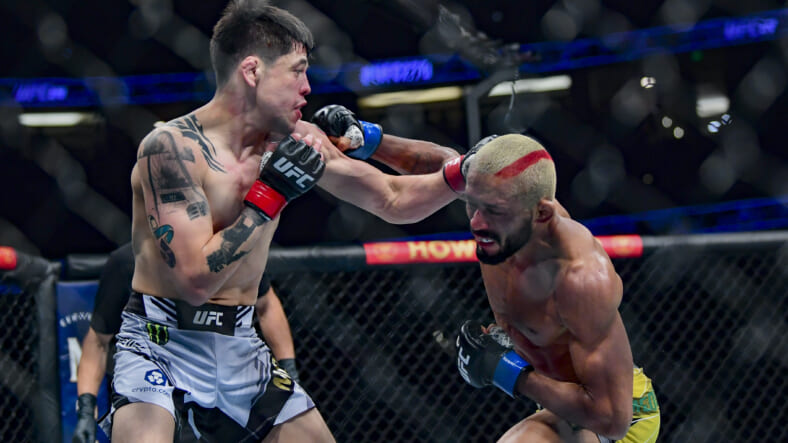 The UFC has finalized their first championship tetralogy. Flyweight champion Deiveson Figueiredo (21-2-1) will be fighting in front of his home country when he takes on the interim flyweight champion Brandon Moreno (20-6-2).

The fight is set for UFC 283 which takes place on January 21st in Brazil. In the promotion’s first trip to Brazil since the pandemic, they are bringing one of their Brazilian champions. They are also bringing a historic fight.

We’ve never seen a situation like this before in the UFC. These two men have fought three times with three different outcomes. In their first fight, a point deduction and a razor close fight led to the men fighting to a draw.

Then, Brandon Moreno submitted Figueiredo to become the UFC flyweight champion. Figueiredo then turned around and defeated Moreno by decision to reclaim the flyweight title. Now, they will meet for the fourth time looking to settle this once and for all.

Now, we haven’t seen Figueiredo since UFC 270 earlier this year when these two men last fought. That night he entered the challenger and was able to sit behind his power and win enough rounds to win back the flyweight gold.

Originally, the promotion wanted to run this fight back sooner. However, Figueiredo suffered a finger injury that wouldn’t allow him to train for months. In the meantime, the promotion booked Brandon Moreno in an interim title fight against Kai Kara-France.

That was a very entertaining fight and Moreno pulled off the TKO win in the second round after Kara-France had a ton of success. Now, the two best flyweights in the world will settle the score. Both men will enter with gold and unless there’s a repeat of the first fight, one man will leave undisputed flyweight champion.