Could Tyron Woodley be on the UFC chopping block? 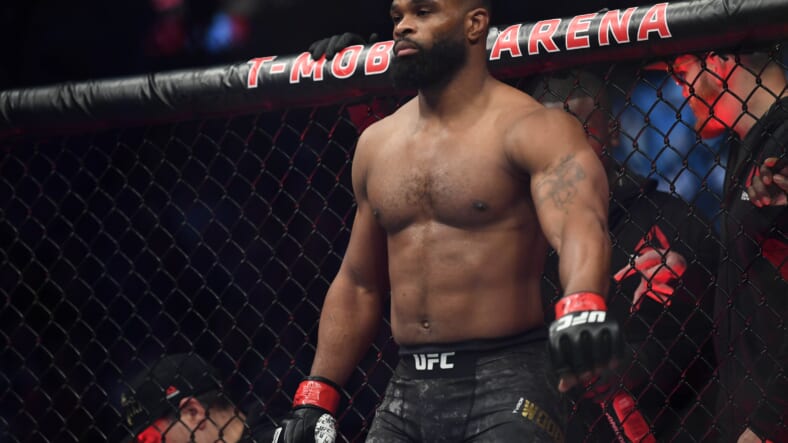 This past weekend UFC fans were shocked to see the news that Yoel Romero had been cut by the promotion. One of the best middleweights in the world who’s last appearance inside the octagon was for the UFC middleweight title.

Romero was the fifth ranked middleweight in the UFC. Dana White was asked about the decision to release Romero after UFC Vegas 16. White made the announcement that the promotion was going to be going through some serious cuts.

White said that the UFC would be releasing up to 60 fighters between now and the end of the year. ESPN’s Ariel Helwani reported that the number could be as high as 80 fighters getting released by the promotion.

White also said that Romero wouldn’t be the last big name to go. There would be some other recognizable names that the promotion would move on from. That got me thinking about potential UFC cut candidates.

I started looking up and down the rankings for all of the divisions. There was one name that immediately jumped out at me as a potential option to be cut. That would be the former UFC welterweight champion, Tyron Woodley (19-6-1).

Could the UFC cut the former champ?

I honestly never thought I would be writing about the possibility of Tyron Woodley getting cut, but here we are. I should preface this by saying that I have no insider knowledge on this and this is purely speculation at this point.

So, why do I think the former UFC champion could be on the chopping block? Well, for starters, Woodley makes a lot of money when he fights. It’s clear that the UFC is going to be trimming the fat which means high earning fighters who are not apart of the future.

Being a former 5x champion, Woodley earns a lot when he steps into the cage. Woodley’s resume earned him the money that he receives. However, his last three performances have been horrendous.

Against Colby Covington, Gilbert Burns, and Kamaru Usman, Woodley hasn’t even won a round. He’s been completely dominated in all three of his last UFC fights. He’s looked like a shell of his former self inside the octagon.

Woodley has other avenues for making money outside the UFC and it’s been questioned on if he’s truly focused on fighting. Another thing about Woodley is the fact that he’s turning 39 in April.

White even made comments suggesting he think about hanging it up after the Covington fight. All of this and it’s not like Woodley and the UFC have had a great working relationship. Dana White has had negative comments multiple times regarding Woodley.

Mix all of that together and you have a prime candidate for a UFC cut. However, I don’t think Woodley should be cut from the UFC. This article is completely going off of the assumption that more big names are going. Don’t be shocked if you see Woodley exit the promotion.