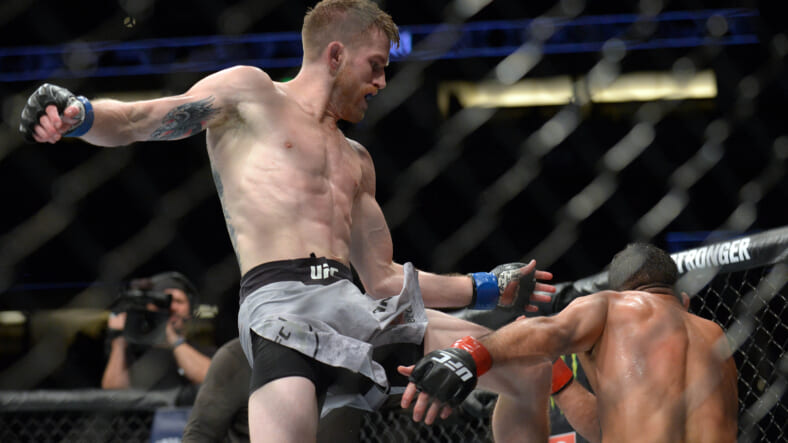 In the headliner of UFC Vegas 60, we saw a pivotal matchup between two of the best bantamweights in the world. The surging Song Yadong (19-6-1) was taking on former interim title challenger Cory “The Sandman” Sandhagen (14-4).

While this was his eleventh fight inside the octagon, Song Yadong is still at the young age of 24. However, despite his young age, he’s shown himself to be a contender in the bantamweight division going 8-1-1 in ten fights. That run includes wins over Chito Vera and Marlon Moraes.

However, Sandhagen was going to be his toughest test to date. So far in his UFC career, the only men to defeat Sandhagen are Aljamain Sterling, TJ Dillashaw, and Petr Yan. Just three of the last four bantamweight champions. He’s one of the best in the world and he was looking to show that this evening.

The UFC Vegas 60 headliner kicked off with a touch of the gloves. Sandhagen immediately starts pressuring and looking for the jab. Takedown attempt for Sandhagen and Song defends well. Sandhagen holding Song along the fence and starts working knees to the thighs.

Song pushes him off and they are back to striking. Nice body kick from Sandhagen finds the mark. Right to the body for Sandhagen and then he tries a spinning kick that misses. Low kick now for Sandhagen who is racking up the points. Big left counter lands for Song and then Sandhagen shoots.

Entering the second round at UFC Vegas 60 and it’s evident that both of these men are very evenly matched. Song immediately presses forward with pressure to start the second. Soft low kick from Sandhagen and then he throws a flying knee that misses.

Right straight for Song lands. Big lead left hook lands for Song. Sandhagen counters and then another left hurts him. Sandhagen bounces off the fence and seemingly has recovered. Song staying very patient here. Shot from Sandhagen and he gets the takedown, but Song is right back up.

They break and Song is trying to really press. It’s a nasty cut that could cause the fight to end. A sense of desperation from Song here as the cut is right above his eye. Left straight lands for Sandhagen. Front kick and a leg kick from Sandhagen. Sandhagen shoots and gets the clinch. Another nasty elbow from Sandhagen and the round comes to a close. A round for Sandhagen at UFC Vegas 60.

Entering the third at UFC Vegas 60 and momentum seems to be with Sandhagen now. Double jab from Song starts the striking then both men exchange body kicks. Low kick from Sandhagen followed by a high kick attempt from Song. Big right hand lands for Song and Sandhagen shoots again but Song defends easily.

Nice combination for Sandhagen lands and he follows it with a jab. Left to the body and a flying knee lands for Sandhagen as the round closes. Gotta think it’s another round for Cory Sandhagen at UFC Vegas 60.

Entering the fourth at UFC Vegas 60 and Sandhagen could be up 3-0. Sandhagen opens the fourth with a double jab. Huge body kick from Song and then Song unleashes with a big combination up top. Big left straight for Sandhagen lands right on the cut.

Right hand for Song lands nicely and now Sandhagen lands a big body kick. Kick attempt from Sandhagen is caught by Song and Song throws a leg kick to take Sandhagen down. Sandhagen scrambles and gets back to the fence.

Sandhagen gets up and reverses the position. Knees to the thighs landing for Sandhagen and the blood is really flowing now. Big right hand lands for Song on the break. Song is holding the center and he’s throwing some crisp jabs.

Sandhagen settles into half guard and he starts trying to target the cut. Short shots and a nice elbow from Sandhagen. The blood is flowing on Song. Sandhagen postures up but can’t land anything. The round comes to a close and this one might get stopped. The doctor comes in and calls the UFC Vegas 60 headliner.