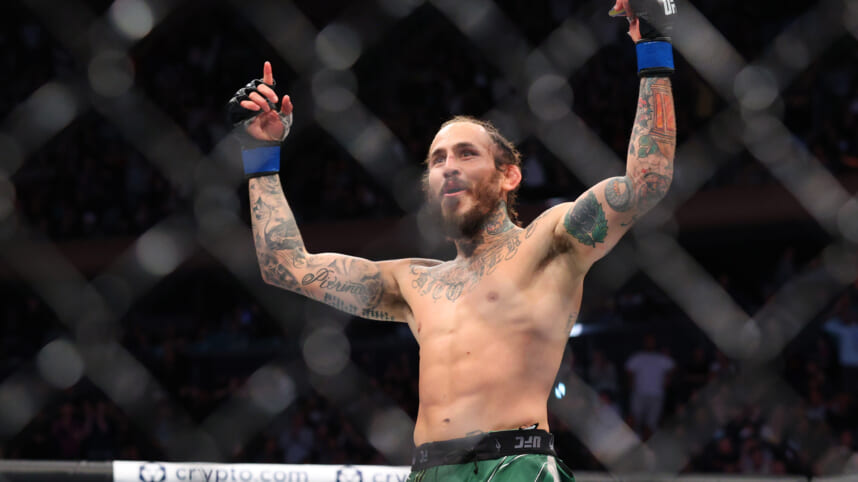 In the headliner of UFC San Diego, we saw a pivotal matchup in the bantamweight division. Former bantamweight champion Dominick Cruz (24-3) was taking on the surging top contender Marlon “Chito” Vera (21-7-1).

Vera entered this contest riding a three-fight winning streak. In those three wins he’s defeated the likes of Rob Font, Frankie Edgar, and Davey Grant. The win over Frankie Edgar at UFC 268 was the true highlight where he knocked him out cold with a front kick.

Dominick Cruz also had a winning streak of his own heading into this evening. Cruz defeated Pedro Munhoz and Casey Kenney in his past two bouts. Tonight was a big step up for the former champion in taking on Chito Vera.

The UFC San Diego headliner kicked off with a touch of the gloves. Cruz marches forward and here we go. Head kick and a big combination from Cruz starts the action. Another blitz from Cruz and he lands a clean combination on Chito Vera.

Vera holds the center and he’s starting to try and read Cruz. Body kick lands for Dominick Cruz. Cruz light on the feet and he lands a beautiful low kick. Vera starting to plot forward. Vera throws a kick, but Cruz catches it. Cruz throws him to the ground and lands a couple of leg kicks as Vera gets up.

Left hand from Chito Vera sits down Cruz briefly but Cruz is right back up. Low kick and a big combination lands for Cruz who seems to be okay. Another blitz from Cruz. Vera holding the center strong here and you can tell he’s looking for power over volume here.

Beautiful takedown attempt from Cruz and he gets Vera down. Cruz postures up and lands a couple of nice shots. Vera tries to hit an arm bar and nearly has it. Cruz gets out and the round comes to a close. 1-0 Cruz at UFC San Diego.

After one round at UFC San Diego, Chito Vera knows that Dominick Cruz means business tonight. Vera comes right out to start the second and he throws a head kick. Blitz combination from Cruz gives him some space. Head kick attempt from Cruz and he follows with a right straight.

Like much of the first round, Vera holding the center. Vera plotting forward looking for big power shots. Cruz comes in but it’s Vera that lands. Body kick lands for Cruz. Both men throw big combinations and both land pretty good shots in the pocket.

Powerful low kick from Cruz and then he follows it with a big combination. Vera tries throwing back and Cruz waves him on. Another big low kick lands for Cruz. Vera trying to cut off Cruz but he’s not having much success right now. Nice combo lands for Cruz but Vera answers with a stiff right hand.

Vera really starting to close the gap here. Jab and a right straight lands for Dominick Cruz. Head kick attempt and a right straight for Cruz. Takedown attempt for Cruz but Vera defends well. Vera closing the distance here and both men land jabs. The round comes to a close and it’s 2-0 Cruz at UFC San Diego.

Cruz has won the first two rounds at UFC San Diego, but it feels like Vera is getting closer. Both men meet right in the center and Cruz throws to open. Low kick and a combination lands for Cruz. Another low kick and a big combination behind it for Cruz.

Vera lands one big shot in that exchange that resets Cruz. Chito Vera now trying to come forward and he lands a brutal leg kick. Huge 1-2 from Vera sits down Dominick Cruz. However, Cruz bounces right back up and he’s throwing. Sensational recovering ability from the former champion.

Jab lands for Cruz who seems to have his legs back. Vera is just stalking here but he’s not trying to throw much. Combination lands for Cruz. Cruz advances but he eats a combination from Vera. Vera really starting to get aggressive with two minutes left in the round.

Takedown attempt from Cruz that Vera defends. On the way up, Cruz and Vera both land shots. Jab lands for Cruz and he throws a combination behind it. Unorthodox combination from Cruz and Vera lands a jab. Now Cruz is coming forward and he’s landing big shots here.

Takedown attempt from Cruz and he has Vera against the fence. Big elbows in the clinch from Chito Vera. Both men trade body kicks and the round comes to a close. Chito Vera wins his first round at UFC San Diego.

Entering the fourth and Cruz is still ahead at UFC San Diego, but that gap is closing fast. Cruz starts the striking with two quick combination. Big takedown attempt from Cruz but Vera defends. Cruz is coming with a lot of heat to start the fourth round.

Short left hook for Cruz and now Vera is plotting forward once again. Nice right hand for Cruz and Vera really hasn’t thrown in the first minute. Cruz enters but Vera drops him with a jab on the entry. Again, Cruz pops right back up and throws.

Jab to the body for Cruz and Vera lands a body kick. Nice 1-2 lands for Cruz and he gets out of the pocket. Huge head kick from Vera and Cruz is out. Massive statement from Chito Vera.