Can Carla Esparza get back to the title after her loss at UFC 281? 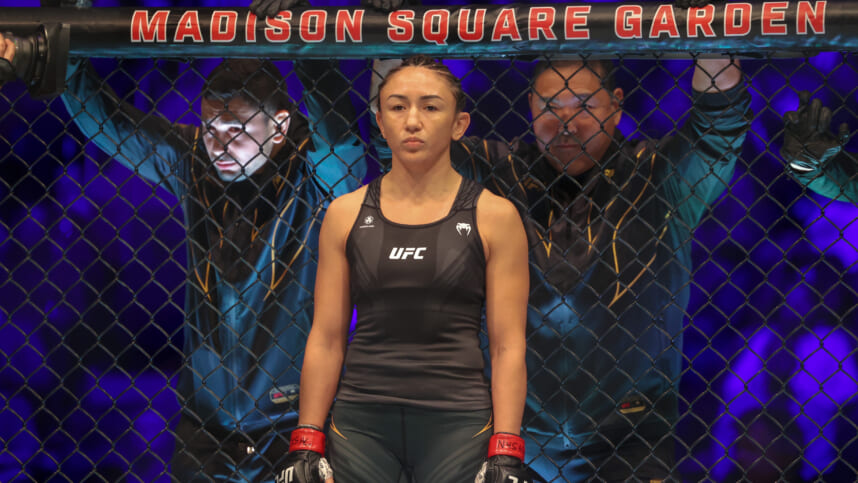 This past Saturday in the co-main event of UFC 281, the strawweight title was on the line. Carla Esparza (19-7) was looking to defend her title against former champion Zhang Weili (23-3). Heading into the bout, Esparza was a massive betting underdog despite being the champion.

Esparza won the belt by narrowly defeating Rose Namajunas back in May. In the MMA math world, it would make a lot of sense for Esparza to be the favorite. I mean Esparza is 2-0 against Namajunas while Weili was 0-2 against Namajunas.

Yet, virtually nobody was buying into Esparza defeating Weili. It was evident from the opening minutes that it would be a tough fight for the champion. Weili was walking Esparza down and hitting her with big shots. Esparza wasn’t able to get any significant grappling control which was her only path to victory.

In the second round, it was more domination from Weili. The two fighters ended up in a scramble that saw Weili take the back of Esparza. Weili locked in a reverse crucifix position and then locked up a choke. Esparza, only having one arm to defend, was forced to tap right away crowning Zhang Weili the new UFC strawweight champion.

Can Esparza get back to UFC gold?

This marked the end of Carla Esparza’s second reign as UFC champion. In both of her reigns, she never successfully defended the strawweight title. She won the title against Rose Namajunas both times and then dropped the belt in her first defense both times.

However, someone else could become champion and give her a better opportunity. Given the lackluster performance to win the title and the loss in dominating fashion, it’s going to take some convincing to get back to the title. In terms of what’s next, I think a fight with Mackenzie Dern would be good.

Dern is a very dangerous opponent for Esparza given the skillsets of both fighters. Esparza’s path to victory lies with her wrestling yet Dern is the best jiu jitsu practitioner without question in the strawweight division. If Esparza could get a win over Dern while fighting on the ground, that would show UFC brass a lot and could get her right back in the title picture.