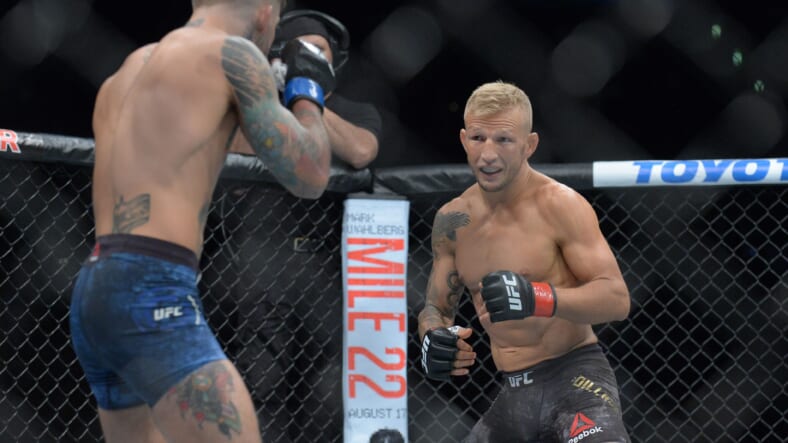 The UFC has finalized a couple of massive main events in the bantamweight division this evening. First, we learned that the promotion has booked a main event on May 22nd between Cody Garbrandt and Rob Font.Â

Just minutes later after that news broke, we learned of another UFC main event in the bantamweight division. And this one is going to be the title eliminator. Per ESPN’s Brett Okamoto, TJ Dillashaw (16-4) will be returning to take on Cory Sandhagen (14-2).

This fight has been rumored for a couple of weeks, but it has now been agreed to by all sides. Cory Sandhagen isn’t getting a UFC title shot, but he’s getting the next best thing in this shot against TJ Dillashaw. He’s getting to fight the former champion with a title shot on the line.

The Sandman has seen his stock rise a ton over the past few months. After a slipup against Aljamain Sterling back at UFC 250, Sandhagen scored highlight reel knockouts over Marlon Moraes and Frankie Edgar.

Knocking out the former UFC lightweight champion in the manner that he did really showed people how good Sandhagen is. Now, he’s going to get the fight that he wanted in taking on the returning TJ Dillashaw.

After two and a half years away, TJ Dillashaw is finally returning to the octagon. The former UFC bantamweight champion just came off of a suspension that ended in January which kept him away since January 2019.

Dillashaw never lost his title inside the octagon. The former champion was forced to relinquish the title after he popped for EPO after his failed attempt to become a two-division UFC champion against Henry Cejudo.

Dillashaw said that he took it to assist with his energy levels as he was trying to make 125 pounds. He insists that he’s never taken it before, but there have been a lot of questions regarding Dillashaw’s potential use of EPO prior to the Cejudo fight.