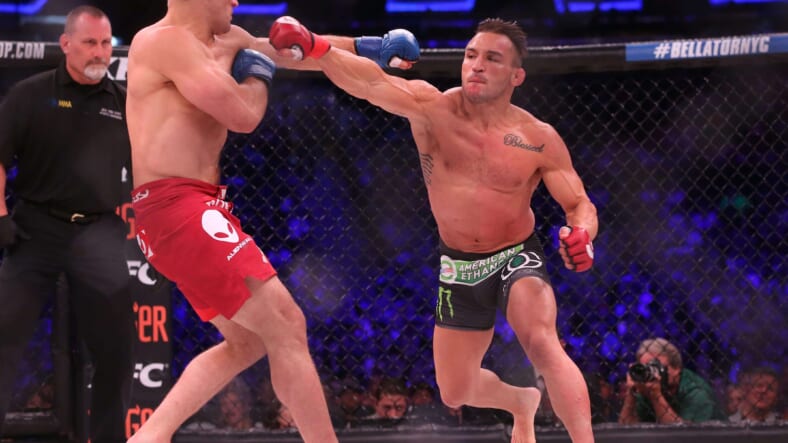 The hottest name in MMA free agency is officially off the board. Michael Chandler (21-5) is heading to the UFC. Dana White took to SportsCenter this morning to announce that the promotion has inked a deal with the talented lightweight.

The UFC has been seen as the favorite from the very beginning to sign Chandler. After spending the majority of his career with Bellator, it appeared that Chandler was ready to test himself inside the UFC who has the deepest lightweight talent pool in the world.

It was reported yesterday that the promotion and Chandler were in advanced talks on a deal. Again, this wasn’t surprising given Chandler’s desire to compete against the best in the sport. The UFC president just made the news official.

Michael Chandler has officially signed with UFC, per Dana White on SportsCenter.

Dana White went on to say that Chandler would be traveling to Abu Dhabi for the UFC‘s upcoming trip to Fight Island. While there have been rumors surrounding a possible fight with Tony Ferguson, that’s not the current plan. Chandler will be serving as the UFC 254 backup.

Should Khabib Nurmagomedov or Justin Gaethje not be able to make the main event, Chandler will step in. If that were to happen, Chandler’s debut would be fighting for either the interim or the undisputed UFC lightweight champion.

The promotion’s lightweight division just got even deeper. For years, people have wanted to see Chandler compete in the octagon, and now he’s going to get his chance. There are so many exciting matchups for Chandler inside the UFC.

I really don’t think the promotion can go wrong with booking Chandler. Matchups with anyone in the top five would make for great fights.

Chandler will serve as a backup fighter for the #UFC254 main event between Khabib Nurmagomedov and Justin Gaethje. pic.twitter.com/7zs1dRwMK1