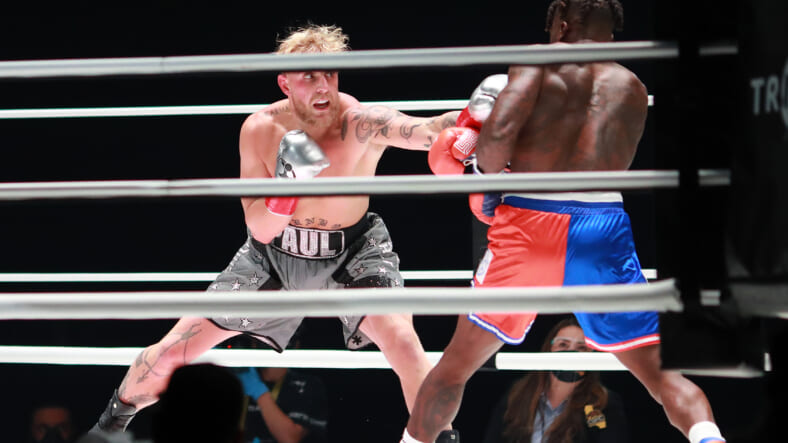 The boxing world was lit on fire yesterday when it was reported that Jake Paul (3-0) would be taking on former UFC champion Tyron Woodley (19-7-1) next. Paul recently signed an exclusive deal with Showtime Boxing in order to take his career to the next level.

In signing with Showtime, you had to expect the competition level would get steeper for Jake Paul. That said, I think everyone was expecting incremental steps up before taking on some really big names.

However, Jake Paul threw that strategy out the window. Paul is coming off of a first round knockout over former top MMA contender Ben Askren. Askren is known for his wrestling and he’s known as one of the worst strikers in all of MMA.

With that, there were a lot of people who were not impressed by his last boxing performance. Yes, Paul got a first round knockout. However, Askren can’t even compete with a lot of beginners in boxing.

Paul has been vocal about his desire to fight MMA fighters in a boxing ring. Fighters like Dillon Danis or even Diego Sanchez were being rumored. However, Paul decided to take a giant step forward and take on a former UFC champion with dynamite in his hands.

Dear, @TWooodley thanks for being the second MMA fighter on my hit list.

August 28th the 5x UFC champion is getting knocked out by a Disney actor. pic.twitter.com/MHhMMp9EGl

Yes, Woodley has struggled mightily losing his last four fights inside the octagon. However, even just this year, Woodley showed that he’s still incredibly dangerous. In his fight against Vicente Luque, he rocked Luque and showed off his explosiveness.

I’m not a Jake Paul fan and I think he’s been incredibly disrespectful towards the MMA community. That said, he’s earned a ton of my respect in taking on this fight. Paul could fight tomato cans and make millions.

However, in fighting Woodley, he’s showing that he’s serious about boxing. He’s the betting favorite, which is crazy to me, and he’s putting everything on the line in this one. If he gets starched by Woodley, there’s no coming back.