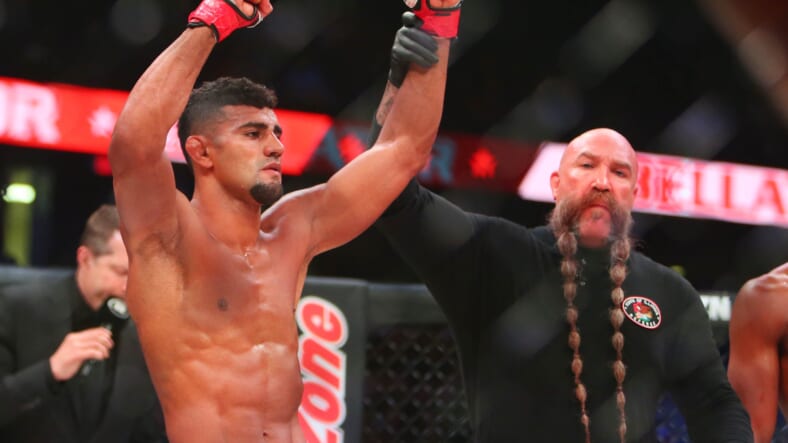 The Bellator welterweight title is going to be defended in June. Yahoo’s Kevin Iole was the first to report today that the promotion had finalized a matchup between welterweight champion Douglas Lima (32-8) and unbeaten top contender Yaroslav Amosov (25-0).

The title fight will take place at Bellator 260 on June 10th. For Amosov, this is the opportunity that he’s been waiting for since he joined Bellator. “Dynamo” signed with the promotion back in 2018 and debuted against Gerald Harris.

After an impressive win against Harris, Bellator put Amosov in there with UFC veteran Erick Silva. Again, it was another impressive win for the welterweight out of The Ukraine.

After three more impressive victories, Bellator booked him against Logan Storley last November. The matchup against Storley told us a lot about how good Yaroslav Amosov can be.

The fight was razor close. While there were times where Amosov looked vulnerable, he ultimately pulled out the decision win at Bellator 252. That win was good enough for Scott Coker to make Amosov the number one contender at 170 pounds.

At Bellator 260, we will see the welterweight return of Douglas Lima. Douglas Lima is one of the best welterweights in the world regardless of promotion. However, last fight took place at middleweight.

At Bellator 250, Lima attempted to become a two-division champion. Lima moved up to take on Gegard Mousasi. Lima had won three fights in a row and he was a popular pick on the betting lines.

Mousasi proved to be too much for the welterweight champion. Lima was extremely hesitant to pull the trigger and he just wasn’t active enough to earn himself a decision.

Now, Lima will go back to his natural weight class where the undefeated Ukrainian awaits him. We should see an incredible matchup at Bellator 260 and I expect the grappling of Amosov to push Lima hard. Will it be enough to take the belt away from him? Time will tell on that one.