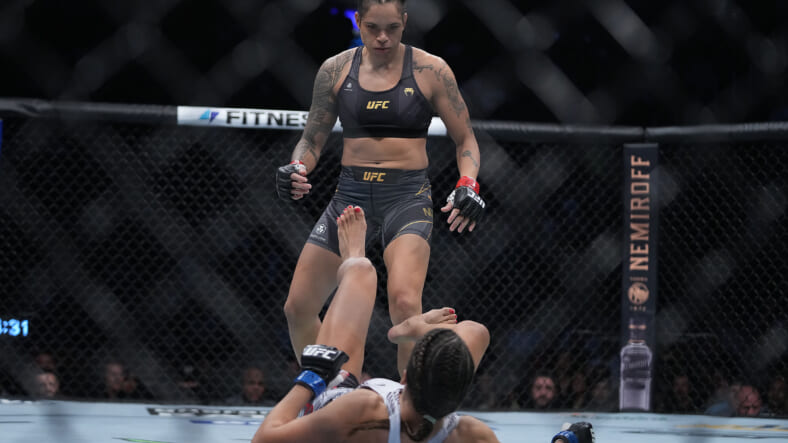 In the headliner of UFC 277, we saw a highly anticipated rematch for the women’s bantamweight title. Champion Julianna Pena (11-4) was looking to show the world that her first win was no fluke as she took on Amanda Nunes (21-5).

These two fought back at UFC 269 and let’s be honest, nobody gave Julianna Pena a prayer. Pena was one fight removed from being choked out by Germaine De Randamie and Nunes hadn’t lost since 2014 and was a two-division champion.

After a slow start at UFC 269, Pena really started coming on strong in the second round. She overwhelmed and broke the champion forcing her to tap. Tonight, she was looking to show that she was the best women’s bantamweight fighter on the planet.

The UFC 277 main event gets started with a touch of the gloves. Nunes takes the center and both are light on their feet. The former champion switching stances here in the opening seconds. High kick attempt from Nunes is blocked.

Pena trying to gauge the distance and she’s staying patient. Nunes tries some lunging shots but both fall short of the mark. Pena comes in and lands a nice right hand as Nunes looks to counter. Nunes throws a combination and finishes with a calf kick.

Lead uppercut lands for Nunes. Right hand over the top from Nunes. Pena just eats the shots and throws back in the pocket. Nunes circles on the outside. Two big right hands land for Nunes but Pena is right in her face. Lead left hook for Pena lands.

Pena lands a nice combination and now she’s coming forward. Right hand from Pena and now the champion is looking confident. Two stiff jabs from Pena land. The confidence is growing for Pena here. Big knee from Pena and she lands a right.

Nunes with a straight left and big shots land for both at the end of the round. Good stuff from both, but the first goes to Nunes at UFC 277.

Pena lost the first, but the UFC champion is showing her toughness once again and she has Nunes on notice. Nunes has a little damage under her right eye to start the second. Body kick from Nunes starts the striking.

Knee attempt from Nunes and Pena comes forward. Huge right hand from Nunes drops Pena bad. Nunes lets her up but Pena is wobbly here. A patient approach from Nunes. Pena rushes forward and gets dropped again by Nunes.

Once again Nunes lets her up. Pena looks rather composed for someone who just got dropped twice. Now Pena lands a big combination. Pena is turning up her pressure now and Nunes is looking dejected here a bit. Lead left lands for Pena.

The pace slows and Pena is plotting forward. Both ladies land and now Pena is really pushing forward. Big exchanges but Pena is holding her own in the second. Right hand from Nunes lands. Pena comes forward and now gets dropped by a left by Nunes.

Pena again welcomed back to her feet by Nunes. This has to be discouraging for Nunes who keeps hurting Pena but can’t put her away. Another big right hand and Pena is wobbled again. The round comes to a close and it’s a huge round for the former UFC champion.

Entering the third at UFC 277 and it’s remarkable that Pena is still in there, but she needs to get going. They touch gloves and the third is underway. Pena is the one starting with pressure here in the third.

Spinning elbow from Nunes and Pena just eats it. Pena still coming forward as Nunes is switching stances. Pena shoots for a takedown but Nunes reverses the position and breaks free. Body kick from Nunes.

Nunes gets a throw and ends up in the guard of Pena. Big elbow from the top from Nunes halfway through the third round. Another nice elbow lands from Nunes. Pena trying to control the posture of the former champion.

Nunes content with just laying in her guard. Pena is really attacking submissions here but so far, Nunes is staying out of trouble. Three straight elbows land for Nunes and Pena is busted open. Another nasty elbow lands for Nunes.

Pena goes for a submission but Nunes gets out and settles back into half guard. More elbows from Nunes. The round comes to a close and it’s 3-0 Nunes at UFC 277.

Entering the fourth at UFC 277 and Pena is going to have to really turn things on here. Nunes holds the center and Pena pushes forward. Big takedown attempt from Nunes and she gets Pena down and immediately settles into the guard.

Pena starts trying to get a high guard. Submission attempt from Pena, but she ends up eating two huge shots from Nunes. Pena is continuously attacking submissions off her back and Nunes is just trying to hold her down.

Pena locks up and arm bar and it’s tight. Nunes defends well and is able to slip out of the submission. The former champion gets in half guard. Pena gets back to full guard but this time her heads against the fence.

Big elbows from Nunes and Pena is bleeding terribly. However, Pena explodes up and she’s able to get back to her feet. Immediately, Nunes takes her right back down. Once again, Pena attacks submissions and gets back to her feet.

Pena charges forward and throws a combination. Nunes gets another takedown. The round comes to a close and it’s a clear sweep so far for the former UFC champion.

Entering the final round at UFC 277 and Julianna Pena needs a finish here. They embrace to start the final round and here we go. Pena pushing forward here and Nunes looks exhausted. Big double leg takedown from Nunes and she gets Pena down.

Once again, Nunes gets Pena against the fence. Two sharp elbows from Nunes. Pena gets a triangle but Nunes powers through. Back to their feet and Nunes gets a trip to once again get Pena down to the ground.

However, Nunes ends back up on top with 90 seconds left. Big elbows from Nunes and Pena starts attacking submissions again. Nunes postures up and lands a massive right hand. Nunes gets her back and locks in a rear naked choke.