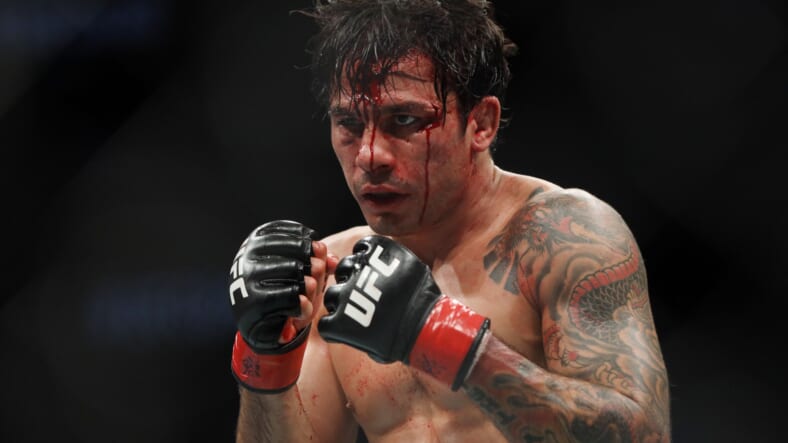 One of the fights I was looking forward to the most at UFC Vegas 18 was the featured flyweight contest. Former RIZIN champion, Manel Kape (15-4), was making his debut with the promotion against the dangerous Alexandre Pantoja (22-5).

Kape got the Michael Chandler treatment from the UFC which tells you what the promotion thinks of him. Back at UFC 256, Manel Kape weighed in as the backup to the UFC flyweight title fight.

Of course, he didn’t actually compete, but the promotion was comfortable putting him in that spot. The UFC was giving Kape a big challenge in his debut with the promotion. Outside of the champion, Pantoja might be the most intimidating flyweight in the UFC.

Pantoja made the walk this evening as the fifth ranked flyweight in the UFC. If you include The Ultimate Fighter, Pantoja holds two victories over the top contender in the division, Brandon Moreno. He’s one of the best and he is the best opponent to welcome Manel Kape.

The highly anticipated UFC flyweight contest started with a touch of the gloves. Pantoja was immediately looking to pressure Kape. Kape remained composed while looking for his openings early on.

Pantoja was really pressuring Kape early and threw a couple of powerful kicks. Kape was circling the outside as he ate a vicious body kick from Pantoja. Then Kape was able to land his first shot of the night with a good left hand.

Pantoja blitzed in and both man landed. Kape landed a stiff jab, but Pantoja countered with a brutal leg kick. The leg kicks were adding up for Pantoja. Both men then exchanged leg kicks as we passed the halfway point in the round.

Kape stepped forward but Pantoja landed a couple of clean shots on him. Pantoja was much more active in the first, but Kape was landing at a high percentage when he did throw. A couple of stiff jabs landed for Manel Kape.

Kape looked for a lead uppercut, but Pantoja countered with a good body kick. A cartwheel kick attempt from Kape found him on the ground. The first UFC round is complete for Manel Kape, but it’s a losing one in my opinion.

The UFC flyweights started exchanging right away to open the second round. It was again Pantoja leading the striking with his kick. Kape was seeming more aggressive, but Pantoja was landing the cleaner shots in the opening minute.

Pantoja landed another good leg kick and then followed with a body kick. Kape was much more accurate with his striking, however, the volume from Pantoja was much higher. Both men then exchanged stiff shots that snapped their heads back.

Kape then landed a couple of clean shots that backed Pantoja up. Manel Kape was looking more confident halfway through the second. Pantoja then landed a clean combination that snapped the head back of Manel Kape.

A couple of body kicks landed again for Pantoja. Entering the final minute and it was still Pantoja leading the striking. 30 seconds left in the round and Kape was able to land a brief takedown, but Pantoja got right back to his feet. I have it 2-0 Pantoja at UFC Vegas 18.

Entering the final round of his UFC debut and I believe Manel Kape needed a finish. Both men embrace before the action starts in the final round. Kape opened the striking with a nice straight left hand.

Pantoja seemed much less active in the final round. Kape steps forward with a nice uppercut, but Pantoja countered with a body kick. A nice calf kick and follow-up left lands for Manel Kape.

Pantoja then lands a stiff left cross. Another nice body kick lands for Pantoja before he pushes forward for an exchange. Kape lands another nice left, but Pantoja threw a couple of big shots on the counter including a big headkick.

There just wasn’t nearly enough activity from Manel Kape in this one. Kape was pressuring with 90 seconds left, but he wasn’t throwing. Another body kick for Pantoja lands. Entering the final minute, Kape really needs to pick it up.

Kape steps forward with a couple of stiff 1-2s. For a moment it appeared that Kape hurt Pantoja, but Pantoja countered with a big shot of his own. 20 seconds left in the round and Kape lands a takedown. The round closes and I’ll give that round to Manel Kape. However, I think Pantoja spoils the UFC debut here.