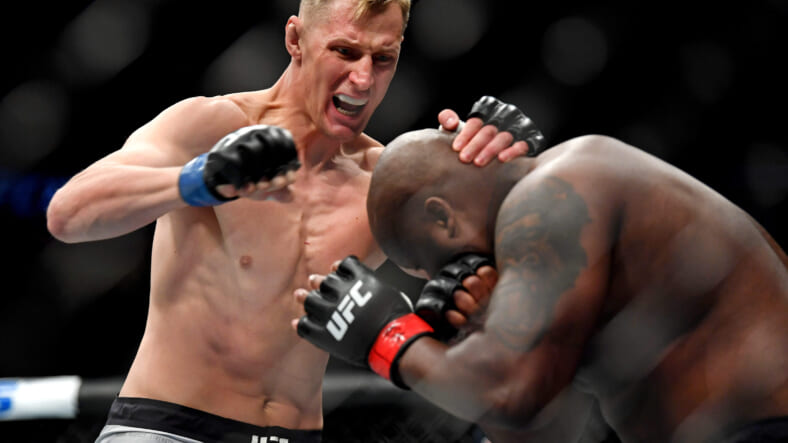 One of the more anticipated matchups on the UFC 254 main card was the heavyweight contest between Alexander Volkov (31-8) and Walt Harris (13-8, 1 NC). Both men were looking to get back on track after losses in their last fight.

Both of these UFC heavyweight contenders were just on the cusp of title contention over the past couple of years. However, speedbumps have derailed both of them. A win for either man at UFC 254 would put them right back into the mix at heavyweight.

As the fight got underway, Volkov immediately came out looking to pressure Harris. Harris was trying to use his speed and quickness, however, he was a bit out of range early. Volkov landed a couple of really stiff combinations in the first couple of minutes.

As the second round began, Harris seemed like he would be interested in taking the fight to the ground. However, Volkov was able to keep the fight standing. Volkov was landing over 50% of his significant strikes early on.

Out of no where, a big front body kick hurts Harris badly. Volkov follows up with a couple of big shots and the ref stops the action. A massive victory at UFC 254 for Alexander Volkov.

A couple of years ago, Alexander Volkov was seconds away from that UFC title shot. Now, he appears to only be another win or two away from being back in that discussion. Volkov looked tremendous tonight on his way to the second round TKO.

After this victory, there are two logical opponents for Alexander Volkov. He could take on Alistair Overeem or Jairzinho Rozenstruik who are both ahead of him in the UFC rankings. Or another option would be the loser of the Curtis Blaydes – Derrick Lewis fight in November.

Those two men were the last to defeat Volkov in the UFC. For Harris, this is a tough loss. He was seconds away from stopping Overeem earlier this year which would have been his third straight knockout win. Now he’s lost three straight in the UFC.